Veterans are dying–and they’re dying at their own hand.

According to the LA Times, veterans have a suicide rate 50% higher than those who did not serve in the military. Some Veterans Administration studies suggest that up to 22 veterans a day commit suicide. Those numbers reflect the herculean challenge in coming home from war–or, simply, successfully making the transition from a life in uniform to a life without one. The public systems that have been set up to facilitate this transition are simply unable to meet the enormous need. Without a supported integration back into a healthy, robust life, veterans are left achingly alone–and mortally vulnerable.

It’s not just about the startling numbers, either. One suicide, after all, is one suicide too many.

Navy veteran Jim Osterman wants to help, and he needs our help. He thinks that we, his fellow skydivers, can make a big difference here, and he wants us to join the effort. 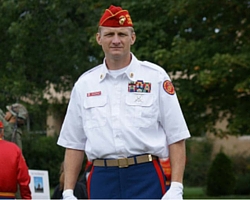 “I knew when I got home from active duty,” he explains, “That what was missing in my life was the camaraderie that I had while I was in the service. The [veteran] suicide rate is as high as it is because these guys and gals are coming home and feeling completely alone, even if they actually aren’t in a physical sense. You don’t have that closeness you had while you were in the service. The dropzone community can fill that gap.”

It took a few years from his homecoming to discover the dropzone–but once he did, he was hooked.

“In 2014, I had a friend come up to me and ask me if I was interested in learning how to skydive. I told him I was all in, and he was like yeap, I’m with you. Well,” Osterman laughs, “He jumped one time, and he quit. I went ahead without him and finished my AFF course.” As fate would have it, there was a drop zone right up the road from his place, and he’s been there ever since…but other vets haven’t been so lucky.

Osterman has been touched by suicide “more times then [he] want[s] to think about.” Two close military friends–Steve Luzynski and Frank Steiner IV–took their own lives. “Steve and I went to boot camp together. We had so much in common we became instant friends,” he remembers. “Frank, I met through my wife Amber and her best friend. He was such an amazing person. I wish I’d had the chance to know him for much longer.” 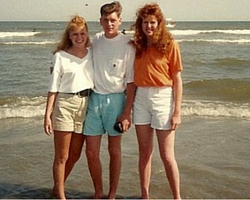 Seized with the need to make a difference–and to commemorate the memories of Steve and Frank–Jim hopped on his Yamaha Raider. He set out on a long-haul motorcycle trip, plotted out on a course from dropzone to dropzone, but not for “normal” skydiving reasons. “This trip has always been about raising awareness for this project,” Jim notes. “Skydiving was always secondary. I went to several drop zones that I knew I would not be able to jump at just so I could speak with the owners in person rather than via email or over the phone.” Once he lands at a DZ, he goes to the DZO at each one and tells them about his mission: to make skydivers aware of the aching need for community in veterans’ lives that he insists can be met by an introduction to the “skyfamily.”

“It makes all the sense in the world,” Osterman explains. “Dropzones are very military-friendly. There tend to be lots of military people around, and dropzones generally already have military discounts and events for, say, Veterans Day and Memorial Day.” Osterman’s goal is to expand that overt welcome past the twice-a-year mark, when veterans are already overwhelmed with commodified cheer. “My mission and goal,” he explains, “Is to let our veterans know that they are welcome to the dropzone everyday–not just the major vets’ holidays. Hopefully they will decide to skydive, but even if they choose not to jump, they need to know that they are welcome to come and just hang out.”

“They need to experience the camaraderie at the heart of it,” Osterman enthuses. “It’s literally lifesaving, in some cases. Pretty much anybody is accepted into skydiving, and it doesn’t matter what your background is–your ethnicity–whatever. It just doesn’t matter. You walk in that door and you are greeted warmly. Veterans need that welcome more than I can say.” 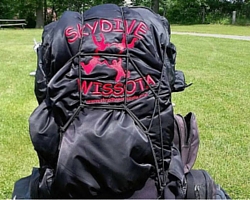 As of publication, Osterman has vroomed up to 38 drop zones with his message. So far, he’s been thrilled by how receptive his fellow skydivers have been. “It really makes my point,” he says, “That even though they’d never met me before, I was completely welcomed and heard.”

A line of questioning that comes up a lot during those conversations confuses Osterman a little bit. It goes something like this: ‘Where do I find a veteran? How do I know if a veteran actually needs my help?’

Osterman’s answers are simple. “Every veteran needs to see the community we’ve built in skydiving,” he says. “If you can get a guy or a gal out of the bar–or whatever bad situation they happen to be in–and out to the dropzone, that’s going to make a world of difference.” Osterman, who is celebrating his fourteenth year of sobriety, further explains, “With my background, I have a special interest in keeping veterans out of the bar. But it’s not just about helping veterans get out of the bar. Veterans are everywhere. Open your eyes and ears. You just need to reach out and talk to him or her and introduce yourself.”

There’s no question that PTSD is a real issue, of course–but Osterman insists that it’s not the only issue veterans grapple with alone. “Just because you’re not suffering from PTSD doesn’t mean that you aren’t lonely,” he explains, “Or that you aren’t sitting at home and staring at the wall. All veterans need a sense of community when they leave the service, regardless of diagnosis, and the dropzone can be that for them.”

Not sure how to help? It’s easier than you think.

“If you’re a skydiver, you can do this,” Osterman insists. “When you learn that someone is a veteran, approach them with an invitation. Let them know that they’re welcome to come out anytime and just hang out–sit on the park bench and watch some swooping, or join the weekend barbecue, or whatever else happens to be going on. Offer them a ride.”

“We’re looking to get these men and women out of whatever isolating situation they might be in and bring them to the dropzone so they can see the camaraderie that we as skydivers share,” he continues, “If we help even one man or woman see that people do care as a society, it will all be worth it. And if that veteran invites the other veterans around him or her in turn, the good just keeps growing.”

When Osterman’s motorcycle journey began, his route was meant to cover 4,000 miles. By the time he got home, he had logged just shy of 7,000. For now, his trip has ended–but he’s planning on repeating the journey on a different, westerly route when the weather warms in 2017, again fully supported by his beautiful wife, Amber, his daughter, Kelsea and his son, Cayden.

“‘Bring a Veteran to the Dropzone Day’ isn’t enough,” Osterman says. “I want the skydiving community to participate in the mission to bring veterans to the dropzone whenever, wherever they can. It’s not just another day. It’s another place for veterans. We can save lives.”

Skydive Carolina is proud to support Jim Osterman in his efforts to improve–and, in some cases, even save–veteran lives. We thank him for his tireless efforts on the behalf of his fellow veterans and look forward to championing him in every way we can.