When we’re more than nine decades old, we hope to still call the sky “home.” Recently, we had the honor of jumping with an extraordinary military veteran who does just that.

Meet Army Veteran Albert Mancinelli, who served in the 464th Parachute Field Artillery Battalion in World War II. A dapper gentleman with mischievous eyes glinting behind his glasses, he’s a very experienced skydiver in his own right. Mr. Mancinelli made “a hundred or so” jumps during his Army career, he made “a hundred or so” solo jumps–one of which was into Normandy, and a great many of them into active battles. A “natural” skydiver, Mancinelli rushed to join the Army as soon as he turned a fresh 18–which coincided with the apex of World War II–and immediately volunteered when he found out that the Army was looking for skydiving soldiers to join the Airborne.

His exploits were many–and memorable. During one of many operations in World War II, for example, Mr. Mancinelli’s regiment performed a combat jump to cross the German Rhine. Several of Mancinelli’s brothers-in-arms didn’t survive the landing, as their unsteerable round parachutes set them down in trees over German troops with machine guns.

Mancinelli ended up landing about 500 yards away, in an open field, with bullet holes peppering his parachute. He and his fellow American soldiers were finally able to force the German corps’ surrender. For this, and for his many other brave efforts on the part of the American cause, Mr. Mancinelli earned many commendations and medals–including the Napoleon Legion of Honor, France’s highest award. 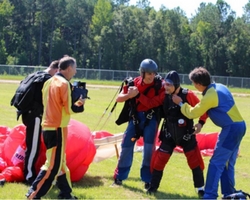 Luckily, Mr. Mancinelli wasn’t jumping into a hissing cloud of bullets on July 20th, 2016. Instead, we took him on a 14,000′ tandem skydive to honor all veterans–especially, those of the airborne divisions–while carrying an official 2016 American Legion World Series game ball and a flag honoring airborne soldiers.

The son of Italian immigrants, Mancinelli grew up in New York–but he’s lived local to us, in Shelby, for the last half-century. We met him in 2012 when he celebrated his 90th birthday by joining us for his first parachute jump since his last leap into WWII combat. He enjoyed that tandem so thoroughly that he returned to us with his idea for this commemorative jump. At Skydive Carolina, we’re wholehearted supporters of our military veterans, so we were more than willing to help this extraordinary man honor his fellows by donating our services.

On the day of the jump, Mr. Mancinelli arrived in excellent spirits. His instructor–with whom he’d jumped to celebrate his 90th birthday, four years ago–briefed him and remarked at the sharpness of Mr. Mancinelli’s memory. After the briefing and gearing up, the pair boarded the plane and whooshed up to the 14,000-foot exit altitude. It went, by everyone’s report, absolutely beautifully. 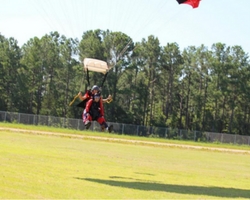 “I had no hesitation whatsoever,” Mr. Mancinelli smiles. “I had no problem. I’d done it many times before. Nothing unexpected, or any of that. We put the brakes on just right, and landed like birds…just like a feather.” His tandem instructor vets his statement, noting that Mancinelli was happy and excited, but “as cool as a cucumber.”

Mr. Mancinelli and his tandem instructor were surrounded on their two-mile descent by videographers–a group of professional jumpers based at Skydive Carolina. Upon landing, Mr. Mancinelli was surrounded by the many excited friends, fellow American Legion members, and relatives who had come to support him in his efforts.

The video of the jump was played on the big screen as the Special Forces Association Parachute Team jumped into the stadium, after which Mancinelli personally delivered the game ball to Congressional Medal of Honor recipient James A. Taylor, who threw out the first pitch.

“Even when I was in the service, you know, I loved how beautiful, it was–looking down, and seeing God’s creation,” Mancinelli remembers. “I wish everyone could see it.”

“Everybody did a wonderful job,” he continues. “It was just beautiful.”

We are so proud to support Mr. Mancinelli, along with all military veterans. We are so grateful for your selfless service, and for the gift of freedom that allows us to enjoy our lives to the fullest.