The history of skydiving in Charlotte runs deep and it begins with our founder Danny Smith – a true Tar Heel through and through. Danny Smith was born just outside of Asheville but made his career in downtown Charlotte as a former vice president of First Union Bank (which would later become Wachovia and then Wells Fargo). During his banking days, Danny was the “Superman” of the bank as he donned his Clark Kent business suit during the week and his skydiving jumpsuit on the weekends! As a member of the Firestone Parachute Team, Danny was jumping into Carowinds every weekend for years! Danny’s love for skydiving was deep and he would eventually start Skydive Carolina as his side hustle in 1986 at the Chester County Airport in Chester, SC – the perfect location centered squarely between Charlotte, NC, and Columbia, SC.

Danny’s banking acumen and conservative approach to skydiving has transformed Skydive Carolina into one of the largest and well-respected skydiving centers in the United States. Today, Skydive Carolina is considered a skydiver’s paradise offering full-service amenities which includes a café (the food is fantastic), a full-service gear store, rigging services, bathrooms with showers, and two incredible turbine airplanes – a 23 passenger Twin Otter (the Rolls Royce of skydiving aircraft) and a 13 passenger, Beechcraft King Air (the Corvette of skydiving aircraft). Skydive Carolina also hosts one of the largest skydiving festivals in the United States – CarolinaFest which attracts skydivers from all over the US and the world.

If you’re wishing to have the ultimate skydiving experience, Skydive Carolina near Charlotte truly has it all!

Why Chester and Not Closer To Charlotte?

If you’re a skydiver, the answer is obvious – space and lots of it! Most skydiving centers are not located near metropolitan areas due to air traffic restrictions and, as most Charlotteans know, the Charlotte Douglas International Airport is the sixth busiest airport in the US and the 7th busiest in the world for takeoffs and landings. Trying to operate in that air space would be disastrous (we’d never get to jump!). In Chester, however, there is little air traffic which allows us to jump, and jump a lot. Additionally, Skydive Carolina has literally hundreds of acres to land in (between the three one-mile long runways that make up the iconic Chester, triangle).

Our Proximity to Charlotte, NC

As the crow flies, Skydive Carolina is 30 miles south of Charlotte. As for drive time, you can expect an approximate 50-minute drive down I-77 South. 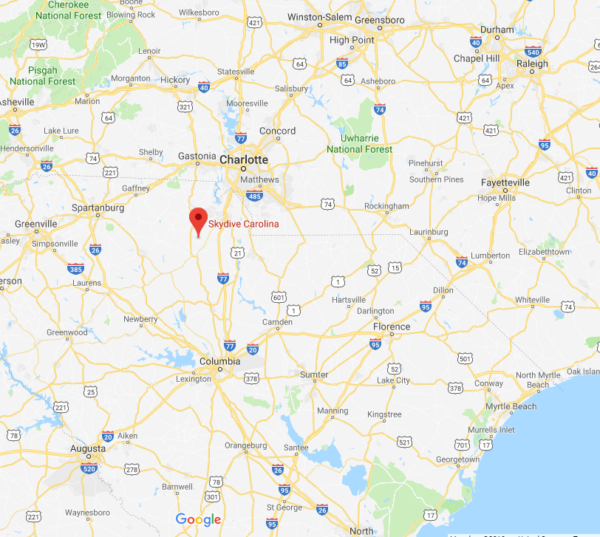 Charlotte Has a Robust Skydiving Community

If you’re interested in skydiving, know that Charlotte is home to hundreds of licensed skydivers who join us every week. Additionally, the great majority of our first-time skydivers come from the Charlotte region.