The Scariest Part of Skydiving Explained

Some people are super afraid of heights, while others are more nervous about riding in a small plane. But the jitters and adrenaline rush that accompanies the fear is exciting! Truth talk: the scariness of skydiving is part of what makes it so much fun! 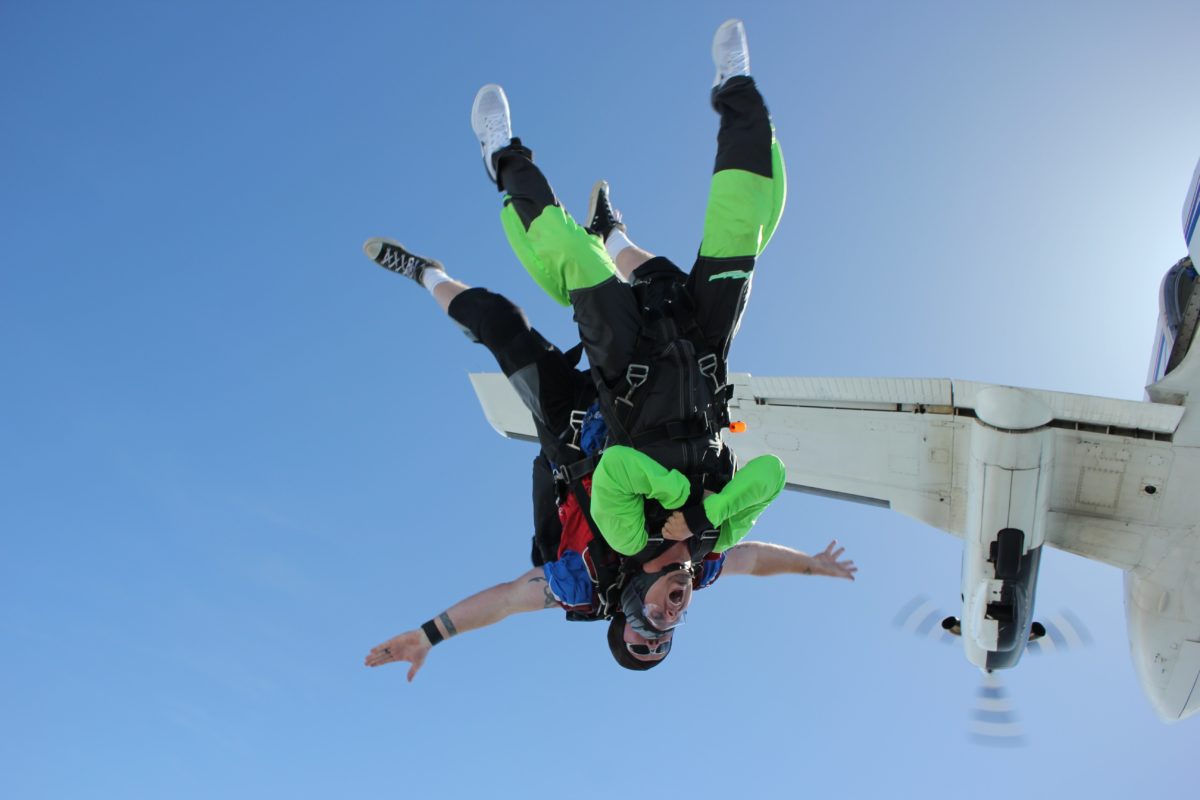 For most people, the scariest part of skydiving is the anticipation.

Waiting for your skydive doesn’t even involve any jumping, but it might actually be the most nerve-racking part of the whole process! Once you’re committed to making the leap, it’s common to start playing out worst-case scenarios and what-if situations. As your jump gets closer, both your skydiving anxiety and your excitement build – it’s a big ol’ mix of why? and why not? jumbled up together.

That why-not-feeling is the hero here because worrying about something that hasn’t yet happened is irrational. And chances are, by the time you check-in for your skydive, your LET’S DO THIS energy is at an all-time high and you’re pumped to get your jump on!

Then another dose of reality hits you.

You get geared up – stepping into your harness that’ll securely fasten you to your instructor – and prepare to board the plane. These steps are a bit of a distraction from your fear because you’re so focused on the task at hand … but once you’re on the plane flying up to altitude, there’s a good chance that your nerves will come back in full force.

All you can think about is the imminence of your jump. All that’s between you and your skydive is mere minutes. Then the door opens and you see people vanishing into thin air. What was already really real becomes even realer. (Realer isn’t a word, that’s how super real it is!) As you move closer to the door, all of your anticipation and exhilaration culminates. It’s now or never, baby!

… and then you jump into the gorgeous blue Carolina sky!!!! 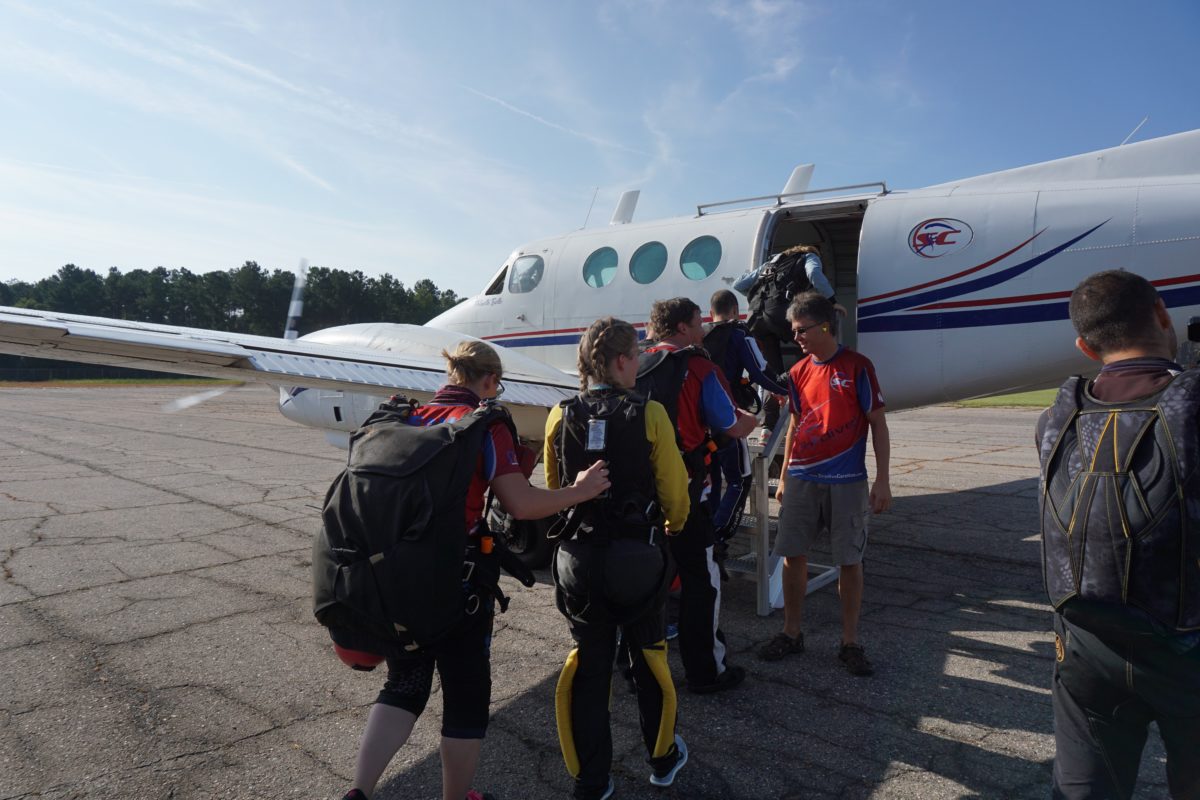 Freefall is the part of the skydive that most first-time skydivers presume to be the scariest. It’s that whole falling-through-the-sky-at-120mph thing. It legit sounds scary! Here’s the irony: freefall might be the least scary part of the skydive!!

When you’re in freefall, you have essentially surrendered to the skydive. There’s no getting back on the plane, so a strong feeling of acceptance envelops you and you commit to, literally, leaving it all out there. Yell! Scream! Do what feels right to release all that pent-up energy – it’ll feel great and remind you to breathe, and your instructor won’t even be able to hear it in all the wind!

Here’s the kicker. Even though you’ll be moving very quickly through the sky, you won’t feel like you’re falling, you’ll feel like you’re floating! Surprising, right?! That’s because, after a few seconds in the sky, you’ll reach terminal velocity – a fantastic physics term that means your fall rate will equal the air resistance pushing back at you. For most people, this happens when you hit 120mph and, as long as you maintain the classic belly-to-earth orientation, you won’t fall any faster or slower until your parachute opens.

Your adrenaline might be peaking, but freefall has almost a kind of calming effect. Amazing. 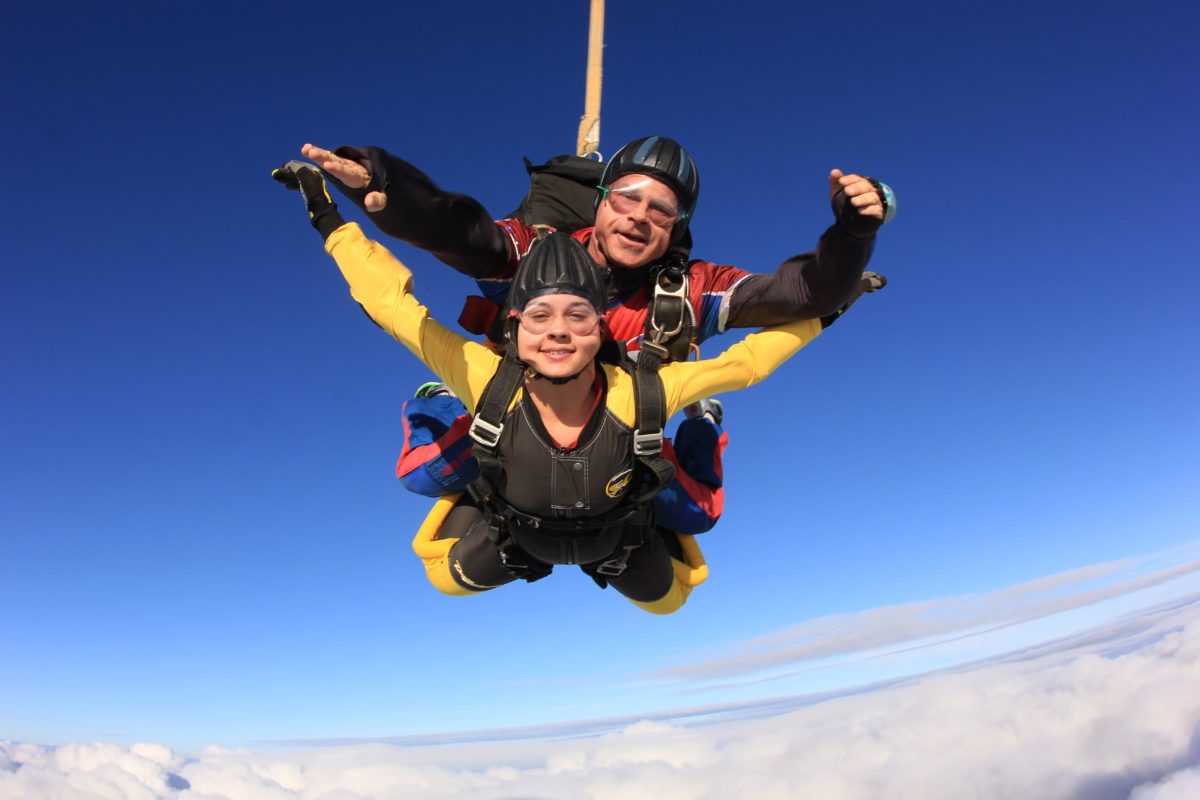 Once your instructor deploys the canopy – i.e. the parachute – you will probably feel a wave of relief. When you’re under the parachute, everything moves at a much slower pace. You can converse with your instructor, take in the views, and soak up the incredibly cool sensation of flying around the sky under a big, beautiful parachute.

The parachute ride is a different type of fun than freefall. If freefall is like surfing a mega wave, then flying under the canopy is like floating down a lazy river.

Experienced skydivers would probably say that landing a parachute is the scariest part of skydiving. It’s a logical fear because it is when you’re closest to the ground. But experienced skydivers jump with smaller, faster parachutes and they have several choices to make on their approach to the landing area. Tandem parachutes are larger and docile, and landing procedures are prescribed. As long as you lift your legs, which you’ll learn to do before your jump, your landing will likely be easy peasy – like jumping off a step.

We’re not going to deny that skydiving can be scary, but we don’t think scary is a bad thing at all! Facing the things that scare you allows you to learn and grow – and the empowerment you gain from skydiving is major fodder for personal growth!

So, embrace that buzzy feeling in your belly every time you think about skydiving and book your jump!! And don’t forget to get the video! Seeing yourself bust out of your comfort zone and soar is a gift that’ll keep on giving! Blue skies!

Related Article: How to Work Up the Courage to Skydive