Skydiving Freefall: What To Expect?

Most people have dreamed about flying, but how many of us can say we actually know what it feels like to fly in real life?

What Is Skydiving Freefall?

The term ‘freefall’ refers to the part of a skydive where you’re not using your parachute, you’re simply falling through the sky, with nothing to hold you back. It’s called ‘freefall’ because you literally are free; there are no constraints, no bungee cords, nothing but the open air and the wind in your face. It’s completely exhilarating! 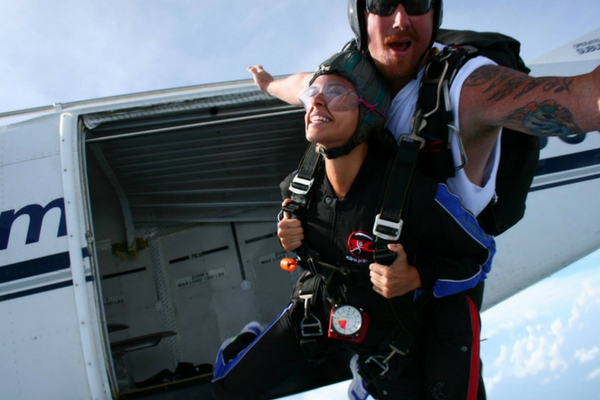 How Long Does Skydiving Freefall Last?

Freefall starts as soon as you leave the airplane, and continues until your instructor releases your parachute. The way we work out how long you’ll be in freefall for is based on two things; your exit altitude (how high you are when you jump) and your freefall speed (the rate at which you’re falling). A typical skydiving jump height is anywhere between ten and fifteen thousand feet – here at Skydive Carolina, it’s usually around 14,000 feet.

Based on a typical skydiving freefall descent rate (which we’ll tell you about in a moment), it takes around 10 seconds to fall the first thousand feet then five seconds thereafter. So from 14,000 feet, opening your parachute around 5,000 feet, you’ll fall for about fifty seconds. During that time, you’re totally able to breathe, relax, take in your surroundings and, if you have paid for a videographer to film your jump, you’ll be able to give your camera flyer a nice wave and a smile, too. 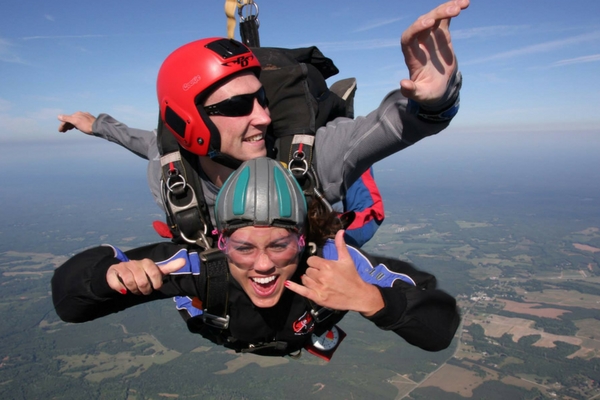 How Fast Do You Fall During Freefall?

Your skydiving freefall speed is related to your weight, the weight of your instructor and the weight of the equipment, all put together. It can also be affected by your body position – which is how experienced skydivers manage to fall together during freefall.

Typically, a tandem skydiver will fall at around 120mph.

Yes, that’s right – 120mph! That’s faster than you’ve ever driven your car, likely faster than most of us have travelled aside from taking an airplane flight or any particularly quick roller coasters!

It’s normal for first-time skydivers to assume that such high speeds of descent would feel, well… quick. But the reality is, it doesn’t.

The only time you really feel like you’re falling is just after you exit the aircraft. For the first few seconds, you’re accelerating to what’s called your ‘terminal velocity’, which is the fastest speed you’ll reach. Once you get to that terminal velocity, you stop accelerating and that sensation of descent is replaced with one of being ‘cushioned’ by the air. It doesn’t feel fast. It feels like floating. It’s as close as you’re going to get to real human flight. It’s addictive! 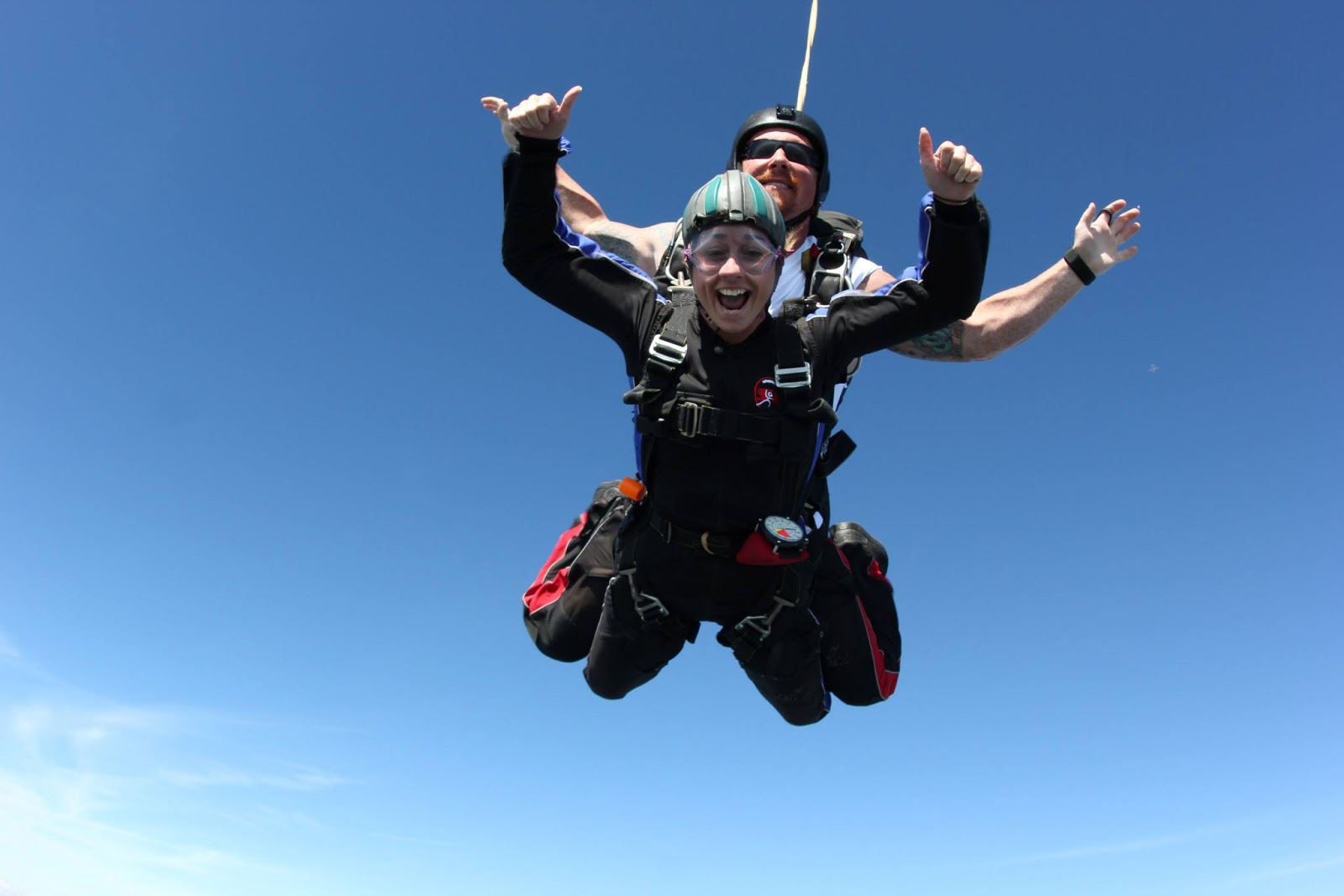 There are some common misconceptions about freefall that are worth addressing here. One is that you can’t breathe – totally not true! The only thing that would stop you being able to breathe in freefall is yourself. We encourage our first timers to scream as they leave the airplane as a reminder to let that breath go! You can absolutely breathe normally during freefall.

There’s another misconception that it’s really loud up there. Yes, there is noise – that’s the wind rushing by you. But it’s not a deafening noise. You can’t, for example, chat to your instructor during freefall. The closest comparison would be the noise you get when your window is open as you drive down the highway.

Something you might not know about skydiving freefall is that skydivers have the ability to control their bodies in the sky, and to move around. Using the basic rules of aerodynamics, they are able to move their arms and legs and torso to turn in place, to move across the sky and even to change their rate of descent. As a tandem skydiver, your instructor may use his/her legs to turn you around in place, which is a lot of fun! 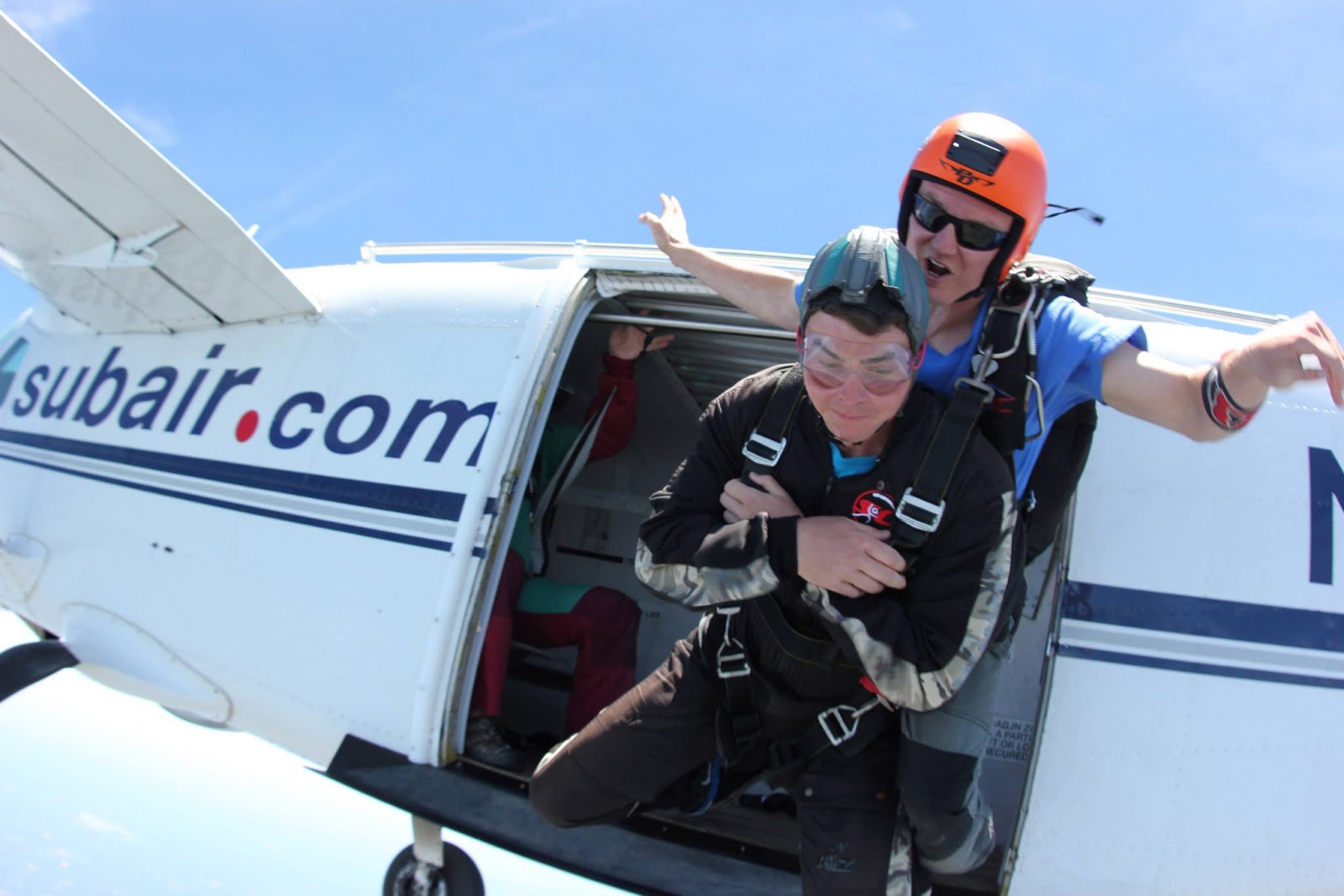 How Can I Experience Skydiving Freefall For Myself?

The most common way to experience skydiving freefall for the first time is as a tandem skydiver. This is where you jump attached to a highly experienced instructor, who operates the equipment, leaving you free to enjoy your skydive and take it all in. Find out more about tandem skydiving with us, or book your skydive today.