Skydive Carolina is excited to announce Patrick Mercier as your point of contact for all gear and sales. This means you can now fulfill all of your gear needs at the dropzone. Sun Path, Aerodyne, UPT, Parachute Systems, Performance Designs, CYPRES – he has dealership with a number of manufacturers. What you want, he can get. Boom, y’all.

If you’re a Skydive Carolina regular, then you likely know Patrick; he’s always here. Maybe you’ve even bought gear from him already. He’s been promoting gear sales on the DZ since 2017.

Now that he’s officially official, we figured it was time to share his amazing story. 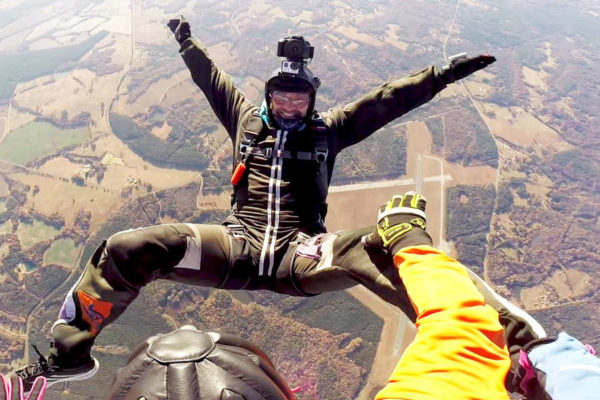 If you know him then you know Patrick is French. If you don’t, you should know that his name is pronounced “Pa-treek”.

You’d think, then, that his first jump might have been in France. Not so. Like the rest of us, his skydiving journey has generous twists and turns.

His first tandem was at Skydive Pepperell in Massachusetts in 2002. The two Master’s degrees he’d earned back in Dijon set him up for a dream-come-true gig – teaching French abroad and English at home.

He was teaching French at Clark University in Worcester when he learned that there was a tandem spot available if he wanted it.

Patrick was instantly taken with the sport. He remembers shedding tears during that first freefall. His mind was blown and the itch to jump more – a lot more – set in.

When he returned to France, he started AFF. That first year he did 30 jumps; the next 50. He started packing parachutes to finance his new obsession. He was legit chasing blue skies.

As luck would have it, his next US teaching post was at the University of Illinois in 2004. On his very first day of work, he learned that right down the road was an event that would change the trajectory of his life: the World Freefall Convention. He was invited to work at the Convention in 2004 … and in 2005 … and in 2006.

Patrick had found his calling.

Patrick’s rigging mentor is Mark Lancaster, aka Mel, who’s based in South Carolina and known across the field. Patrick says “When God created skydiving, He got advice from Mel.”

DZ regulars Gene Stuart and Steve Vaughn have also been influential to Patrick as he’s progressed up the ranks.

“Learning to become a rigger was a big deal. It changed my life,” reflects Patrick. Looking back, this profession was meant to be.

Patrick has always been super detail oriented. He knew how to sew before he knew how to skydive as a result of rubbing shoulders with the fashion set in Paris (as one does?). Skydiving was his passion. And, as an added benefit, he’s one of few humans whose body rejects alcohol. He always has his wits about him (#winwin).

As a tandem camera flyer, AFF instructor, Senior Rigger with back and seat ratings as well as ram-air round chutes for pilots, he’s currently working on his Master Rigger Certification. 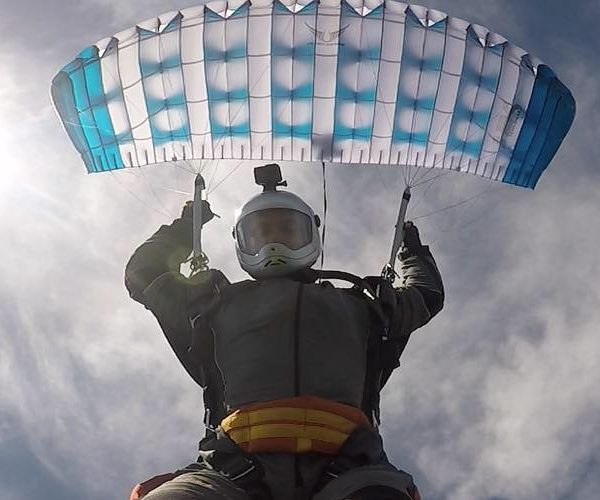 The Other Side of the Coin

Patrick went all-in in 2016, settling near Skydive Carolina and spending every waking moment on the DZ. He’s added 3,000 jumps to his logbook since he touched down here, bringing his total to more than 8,000 … and he has no signs of slowing.

In fact, his hunger to keep growing led to another outlet for his keen eye and celebrated skills. He won a military rigging contract that keeps him hopping from state to state across the South, working with pararescue with the Airforce, Navy Seals and Army Green Berets.

Most every week he’s on the road to a new adventure. His very first assignment landed him on a Zodiac in the middle of the night, night-goggles on, hooking parachutes out of the water. By the weekend, he’s back at the DZ.

“I’m living the dream. I’ve failed at a few things, but I’m winning at this”, says Patrick, beaming. “I couldn’t be happier.”

For aspiring riggers out there, he says the formula he’s found is worth considering: “Diversify your skills and your sources of income. Finance your passion so you don’t burn out.”

Patrick has visited dropzones around the world, and yet it’s our little slice of fried gold on King Air Drive that he chooses to call home.

He admits that it’s unusual for him to stay in one place for so long. “We’re thought of as mid-sized, but we’re a pretty big operation. We have two stellar aircraft and see almost 5,000 tandems annually. There’s a lot to love here as a skydiver and as an employee.”

“The mindset across the staff is everything,” he continues. “Everyone is friendly. It’s the first time I’ve been on a DZ where personalities don’t get old after months of working together.”

Patrick describes Skydive Carolina as human-centered. “DZ leadership is focused on ethics,” he shared. “Everyone works hard and is great at what they do. It’s a pleasant place to work.”

He also cites our high caliber riggers and praises the quality of work from Freefall Photo, our on-site videography partner. 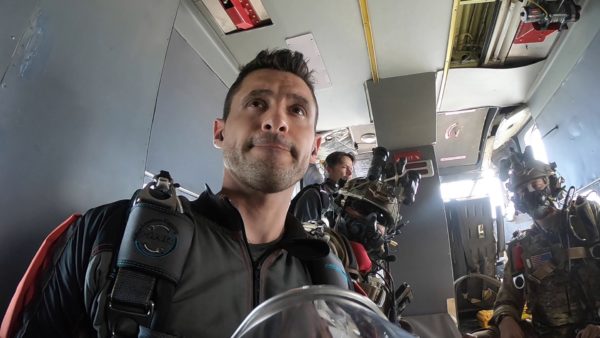 Buying gear from Patrick comes with many benefits.

For starters, he knows a lot about a lot. If you have the budget for new gear, he can help you curate your ideal rig. If you don’t, he’ll guide you in your search for a well-fitting container and help you find the perfect second-hand canopy.

He recommends that you ship your gear directly to him; let him thoroughly inspect it ahead of you taking it up.

And if you have questions or aren’t happy with your choices, he’s here. (Like, all the time.) There’s no better customer service.

It’s more than a transaction with Patrick, it’s a relationship. “Ultimately, my aim is to promote the sport,” he explained.

His passion is evident, and we’re proud to officially welcome him to the Skydive Carolina family.