What Is Angle Flying?

Skydiving is a relatively young sport. The concept of the parachute was invented long before skydivers were linking up in the sky. The first documented account of jumpers linking was the famous ‘baton pass’ in 1958. Since then, skydivers have pioneered the progression of the sport into several disciplines such as:

Angle Flying isn’t new. When skydivers were pioneering the freeflying discipline in the early 90’s, they did “flocking” skydives. Flocking is when skydivers are in the head down orientation, all facing one person (the leader), moving across the sky by angling their bodies to catch air on their legs forcing them to move forward, and the leader in the opposite position going backward.

Then the “atmonauti” discipline was introduced in 1998 by Marco Tiezzi with the help of Gigliola Borgnis in Italy. “Atmonauti,” coined by Tiezzi means Atmosphere Navigators. It’s very similar to “flocking” however the angle of attack is about 45°, a less steep angle than flocking. 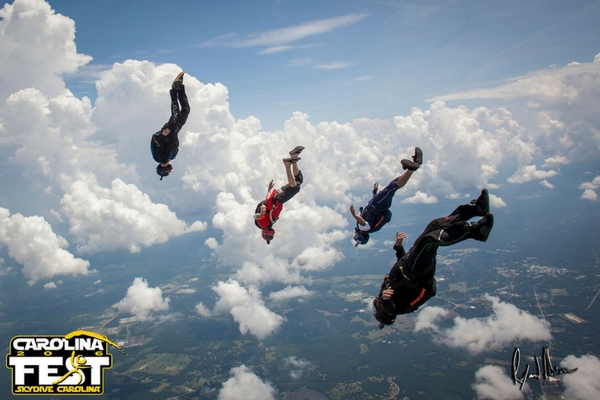 These two phases of development didn’t seem to catch on until 2010. And then, the term flocking – now used in wingsuit flying – wasn’t called Atmonauti, even though very similar. The term Angle flying emerged and was an instant craze in Europe and in the United States and now, the world.

Angle flying basically is “flocking” and “atmonauti” into one. However, it’s broadly accepted as not flat (parallel to the ground like in tracking), nor completely vertical (90° to the ground).

Angle flying presents unique challenges as many of the popular skydiving disciplines mentioned above, involved freefalling straight down. Angle flying requires moving around the sky by navigating. Since there is a lot of constant motion, it’s crucial not to run into other groups or with other people in that group. 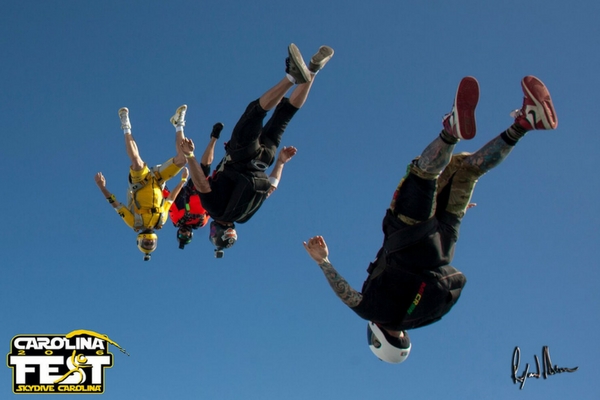 To perfect the discipline of angle flying, many camps have sprung up, including the one that Jay Veenendal is hosting at Skydive Carolina on October 20th. View our Facebook events page for full details.

As with any discipline in skydiving, take your time, get coaching and stay safe!

All photos by Raymond Adams