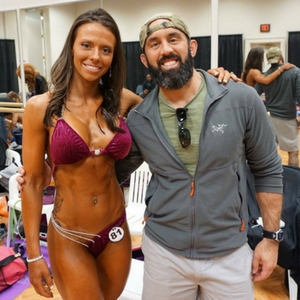 Tony coached at a Crossfit gym in Pittsburgh, PA in 2013 where Denise went to compete. After the competition, Denise’s post-event snack was poached by a three-legged dog and Tony happened to be standing in a place to witness the entertainment. When Denise looked up after the debacle, she saw Tony, and the two laughed. The moment drew them together to talk more and Dee was smitten.

Tony and Dee quickly learned that they had a lot in common: Tony served in the military and Dee in the Air Force, they loved working out and being fit (hence Crossfit), and Denise loved how ‘out-of-the-box’ Tony was learning about his interest in skydiving. It wasn’t until six dates later that the topic of children arose.

Fast forward to today… Tony and Dee have become the new sweethearts at Skydive Carolina, where both have learned to skydive. Here we get the opportunity to discover more of their story:

When and how did you come to the decision to not have kids?

Tony: The possibility of not having kids came up very early in our relationship. We both discussed the issues that we had that would make it either impossible or improbable to conceive without having surgeries. And even then, there would be no guarantee. I think that ended up bringing us closer faster, almost like, ‘Wow, this was already going great, but now I meet someone who understands and accepts a life of not having children’. From that point, we had many discussions. I don’t believe it was an easy decision, per se, but we eventually decided that we would just live our lives child-free.

I think it’s probably been about a year since we officially decided to be child free (which sparked Dee’s idea for the podcast). 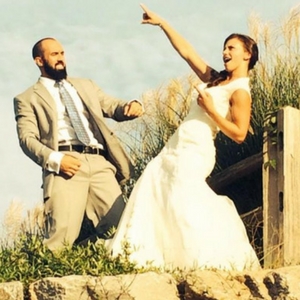 Dee: I found out in grad school that I was having some symptoms consistent with Polycystic Ovary Syndrome (PCOS) and to boot I have a deformed uterus. If I had the surgery, it would put me at risk of rupture when carrying and if I didn’t, then the fetus would either naturally abort or be malformed due to the uterine environment. I found this out two months before I met Tony.

This subject came about quickly since it’s a huge life changer, and I was relieved to hear that it wasn’t just me with fertility issues. We let this idle for a few years and as we settled into our 30’s we revisited the reality of being childless. We went back and forth, even saw some fertility doctors and at the end of it all, felt stronger for making the decision to be childfree than to try to no end, have surgeries and potentially fail. We weighed our feelings and intuition and agreed that was what was right for us. That’s why we consider ourselves childless, but also childfree – because we could aim for children, but we just don’t think it was in the cards for us. We came to accept and embrace that we were meant for something different.

What are your goals in light of not having children?

Dee: To give back to a community in ways that those who are raising children don’t have time for. Also, to continually grow as an individual by constantly trying new things and by challenging ourselves. The more we are exposed to and can master, the more we can use that to inspire or teach others, leading to more fulfillment.

What inspired each of you to start skydiving?

Tony: I don’t remember when skysurfing got to be big. However, I remember seeing it on X-Games and saying to myself “Yep, I want to do that someday!” From there, it was always on my mind. I made my first tandem jump at 18 years old before I left for the military, and at that point, I always promised myself that I would return to the sport and become a “fun jumper”.

Dee: I made my first tandem years before meeting Tony and it went down in the books as one of my favorite life experiences. At the time, I didn’t even think you could become a skydiver if you weren’t an instructor/getting paid to do it. I met Tony and for the first couple of years, we moved around the country. He would make comments about how when we settled in somewhere he was going to finish his license. I loved the excitement in his voice, and couldn’t wait to be exposed to it again! We made the appointment for a “refresher” tandem at Skydive Carolina and after that jump, I asked myself how on earth I wasn’t doing this on the regular yet!!?!?

What are your skydiving goals? 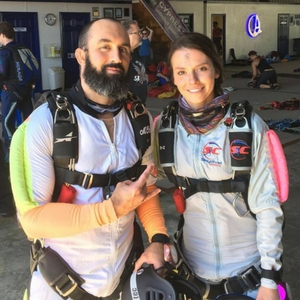 Tony: It’s funny, I have never thought about this! I mean, I’ve never really given it serious thought. Throughout my time as a student, I have greatly admired my coaches (AFF/AFP instructors). I think it’s amazing that they are able to remain so calm, collected, and positive all while they have a first-time jumper who is freaking out inside, and sometimes outside as well. I would love to be able to take on the role of an instructor someday. I think there is something awesome about teaching/molding new jumpers and experiencing that ride all over again with them.

Dee: My goals are to be skilled in all the avenues of skydiving, such as free-flying, formation flying, etc. I would also love to use skydiving as a chance to travel around the world and visit different dropzones! It would be a nice way to meet some great people who you know you already connect with while experiencing new places.

What do you do for work outside of skydiving?

Tony: I have worked in manufacturing for about 6 years now, industries such as extrusion, bottling, and textiles. I am generally in charge of the production floors, making sure what needs to get made, gets made on time, and correctly.

Dee: I used to be a funeral director/embalmer (believe it or not!). I hated the grief work… now I’m a Pathologists’ Assistant. It’s a Master of Health Science degree with a Pathology Certification. Essentially, I am a Physician’s’ Assistant but instead of seeing patients directly, I work in the laboratory, where I assess the resected specimen (organ) for disease and/or cancer. If cancer is present I dictate/dissect the tissue to assess the extent of the disease, margins and take measurements for staging. Also, I’m responsible for completing the hospital autopsies, and what we call frozen sections (patients under anesthesia and the surgeon wants an instant diagnosis or has questionable margins). It’s a privilege and such a rewarding career.

What passions do you have outside of skydiving? 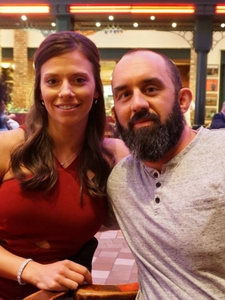 Tony: TRAVELING!! I was fortunate enough to travel to many places during my military time. That is something that I want to continue throughout my life. There’s so much world out there waiting to be explored. I would also have to say, fitness. That has always been something important to me. But now it is more finding creative, fun ways to stay in shape, as opposed to the grind of going to the gym every day.

Oh, and movies!! Haha, yes I am 100% a movie nerd. I also do a podcast called Trex Movie Reviews. Basically, I was talking about movies so much anyway, I figured why not record it and see if anyone else wants to listen, comment, and debate about them.

Dee: Firstly… fitness, as I’ve competed in two Figure competitions (placing second in both… and I’ll tell ya, being the “first loser” is tough!). I may do another one in December, but at least this time the training wouldn’t be over all the holidays and Super Bowl! Secondly, I’d say traveling! I spent 7 years in the military and you just can’t get better than that as far as travel experience. I miss that so much. I also LOVE to read, mostly nonfiction (usually military, health, finance, self-help, biographies, memoirs, etc). I am passionate about personal finance and educating myself and others on the ins and outs of early retirement and humble living.

These two are enthusiastic newbies in skydiving and learning as much as they can. Dee had the opportunity to take a Greg Windmiller course in student status and started to feel more comfortable. “Freefall seemed easy, canopy flying was a lot more about physics which made canopy flying like one big complicated puzzle!”

The duo is making arrangements in their schedule to spend more time on the drop zone and travel. If you see them – give them a great big skydiver welcome into our sport! And be sure to check out their podcast — Meaningful Childless Life.