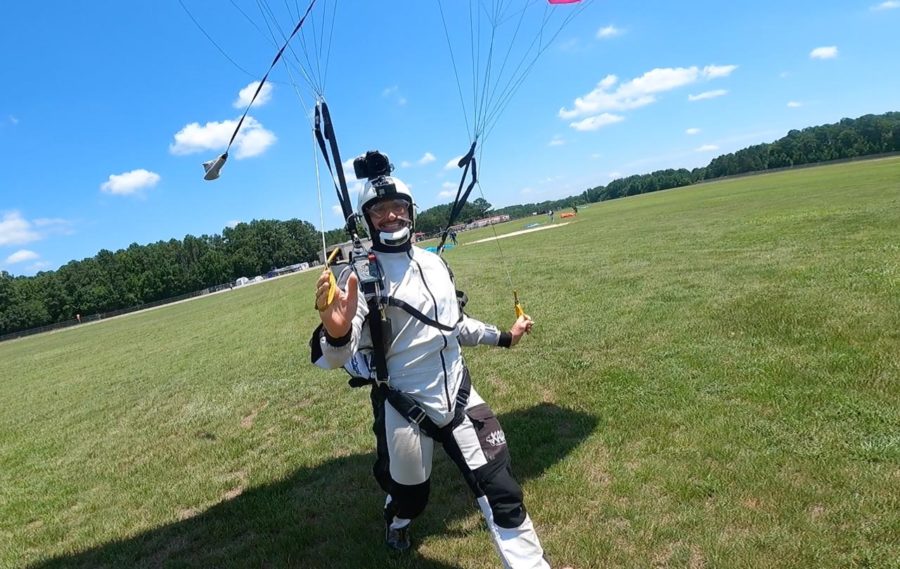 Number of Saves on Reserve Repacks: ~95

Since joining Skydive Carolina as a full-time staff member in 2015, Patrick Mercier has played a pivotal role in the skydiving journeys of so many of the individuals who have walked through our hangar doors ready to take flight.

Patrick is involved in several areas of our operation and has touchpoints with jumpers all along the way. Truthfully, there isn’t much he doesn’t do!

As a videographer, Patrick preserves memories by filming the excitement of countless first-time tandem students. As an Accelerated Freefall instructor, he educates and guides students learning to skydive through our Accelerated Freefall Program. As a mentor, he imparts valuable knowledge of gear, body flight mechanics, and canopy progression to newly licensed jumpers and experienced skydivers alike. As a master rigger, he oversees our rigging loft to ensure all the skydiving equipment used for our operation is well maintained and functioning properly and serves the many licensed jumpers that come to him for routine gear inspections and reserve repacks.

Frankly, without Patrick, Skydive Carolina just wouldn’t be the same.

Without further ado, let’s get to know this member of the Skydive Carolina team. 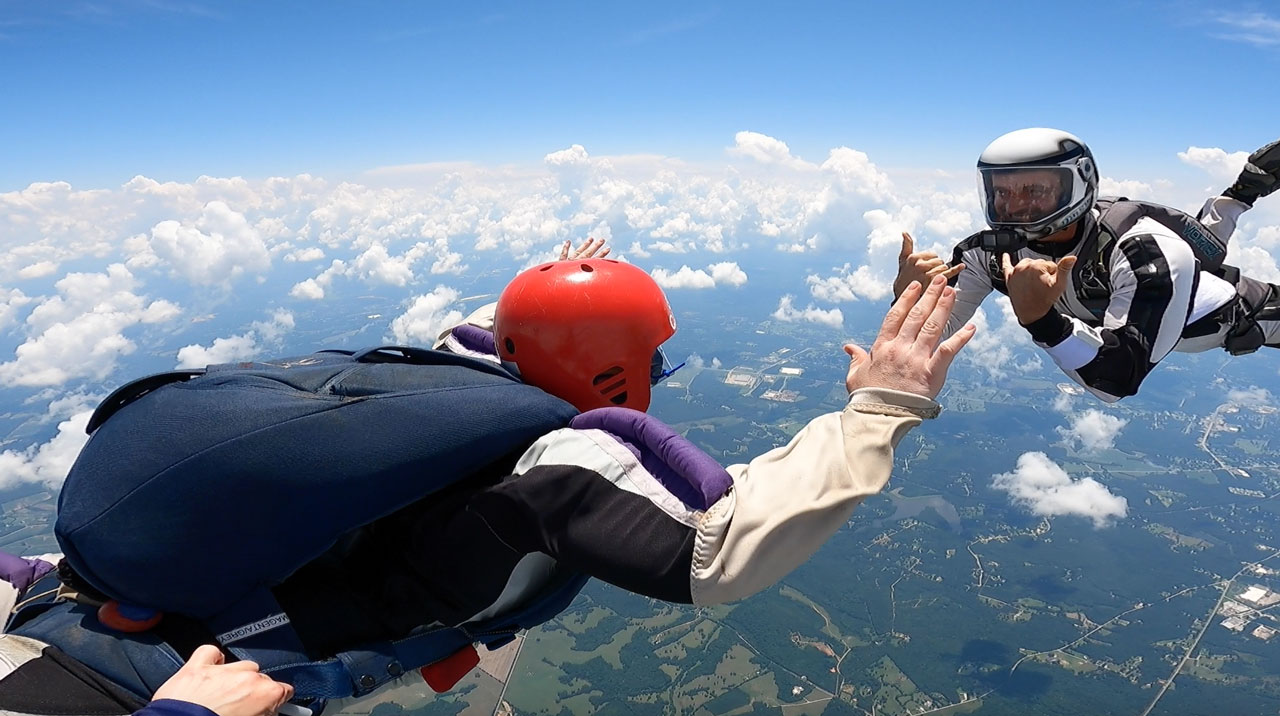 Before becoming a skydiving instructor, Patrick was well accustomed to teaching others. For a time, Patrick worked as a Physical Trainer for professional athletes – primarily basketball and rugby players – in France. Simultaneously, Patrick pursued master’s degrees in language and teaching. Shortly thereafter, Patrick was sent to the U.S. to teach French at the university level. It was at one of these U.S. universities that Patrick first became acquainted with skydiving.

“I was working at Clark University in Massachusetts, teaching French. A group of people had bought a package for a tandem jump, and the night before one of them chickened out. So, they were trying to find someone on campus to fill in. Though I didn’t really know anyone in the group, when I overheard they were looking for someone, I said I’d do it. That jump was what triggered everything … [After the semester ended] when I went back to France, all I could think of was doing it again. I’m a pragmatic person, and I’m careful with my expenses. I looked into the price of an AFF in France, and I looked through all the dropzones to find the best place and price. The dropzone ended up being in the south of France, and that’s where I learned everything.”

“Before I worked full time in skydiving, I had a few degrees, and I used to teach… My entire life I’ve taught everything I’ve been decent at. I have the teaching fiber, and so, when I started skydiving, I had to be someone who teaches too, because it was my passion. The other motivation [for becoming an instructor] was that I wanted to get to a point where I didn’t need to pay to pursue my skydiving passion, and instead, I could turn it into getting paid for my passion.”

How To Beat Burnout

Skydiving burnout occurs frequently amongst those who make it their full-time profession. After working nearly 14 years in skydiving, how has he managed to avoid falling prey to disenchantment within the industry? His secret? 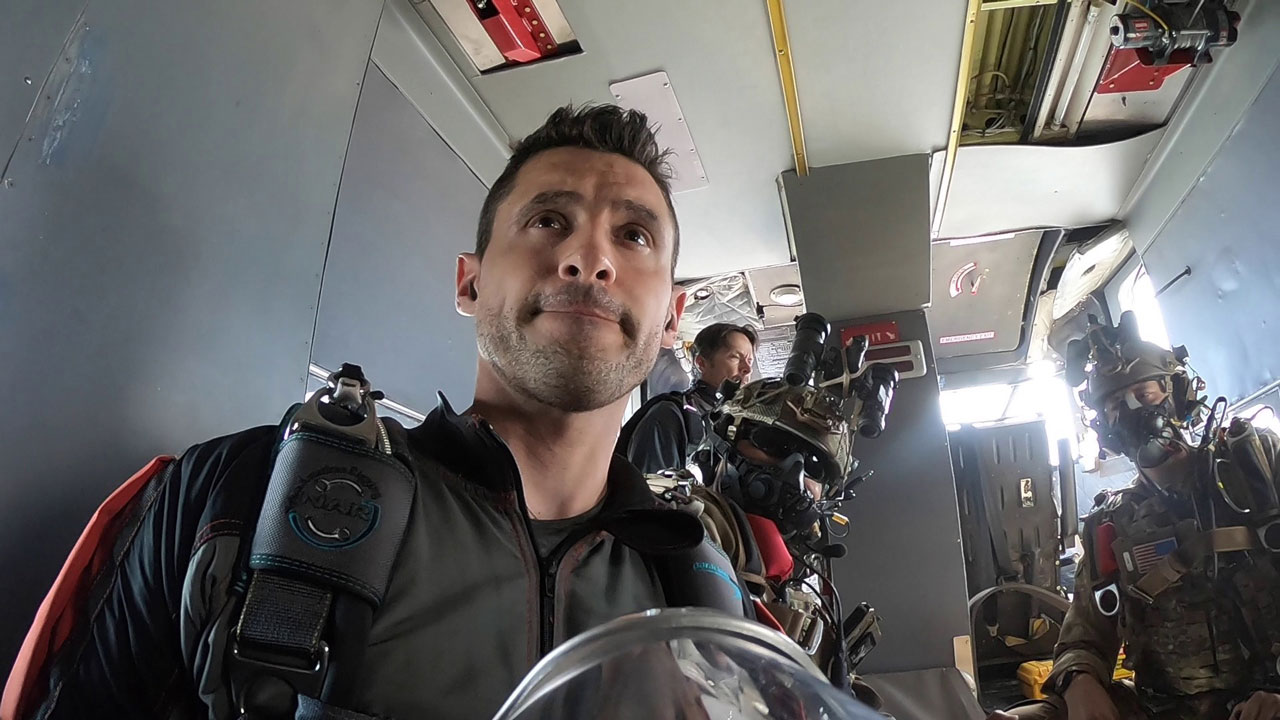 “If you don’t want to get burnt out, get different ratings. Every person is different, so with my AFF rating, I’m approaching them differently to teach them. Diversifying is also why I became a rigger. I’ve always been meticulous in nature, and even before I began rigging, I enjoyed sewing … I went toward rigging because it gave me another thing to do in the realm of skydiving and allowed me to continue to make money even on poor weather days.”

Patrick is now a Master Rigger and considers becoming a rigger to be one of the best decisions he has ever made. In fact, it is this highly esteemed certification which opened the door to allow him to work with the U.S. military, both as a rigger and as a jump instructor.

A rolling stone gathers no moss, and for most of Patrick’s life, constantly moving was the status quo. With a reputation like that, how has Patrick managed to “stay put” at Skydive Carolina? 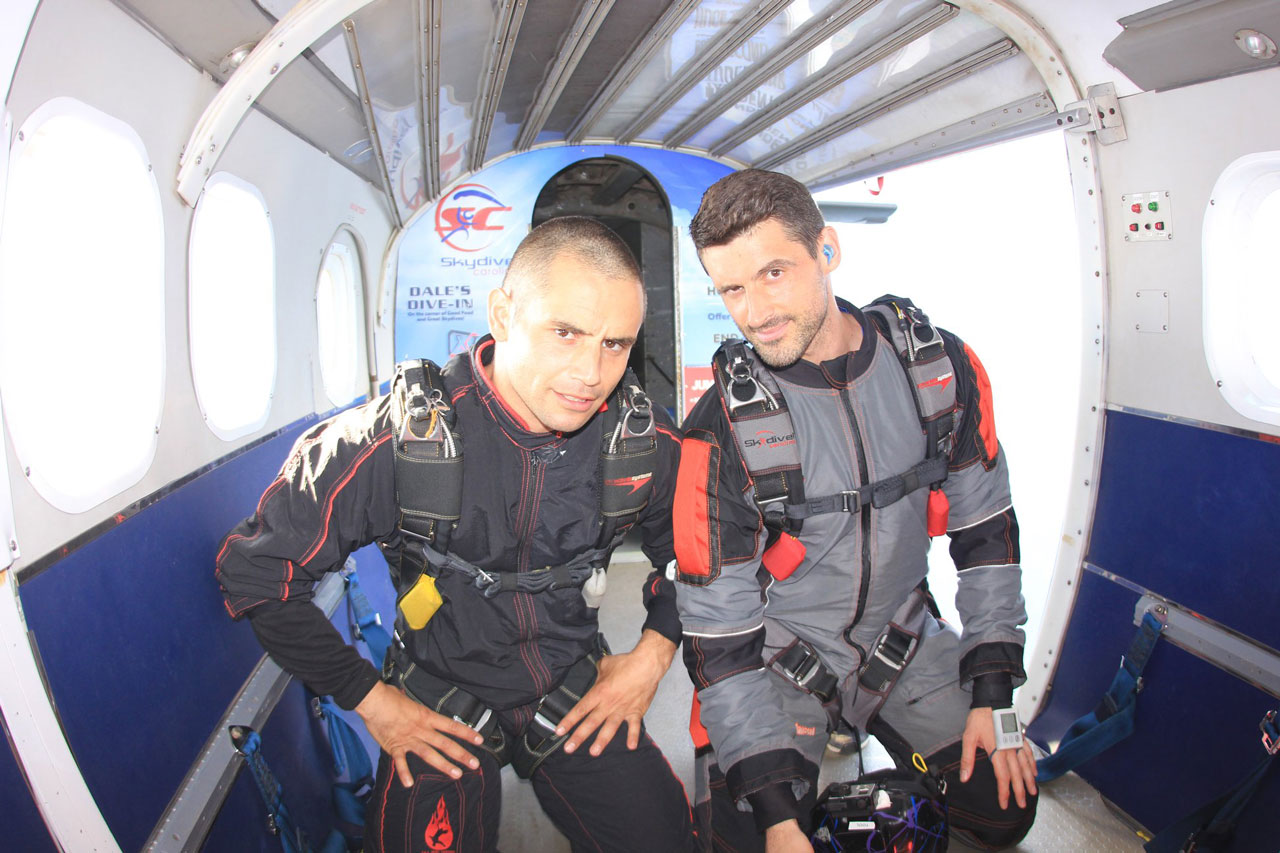 “I moved 20 times before I was 20 years old. I am used to changing, adjusting, and adapting to a new place. This is going to be my eighth year at Skydive Carolina, and never in my life have I spent that much time in the same spot. The secret is two things. The first way I avoid burnout is going on military contracts … I travel all over the US with the military. I’m able to go to so many states throughout the year, and it’s fun. It feels like a vacation, and I’m refreshed. When I return, I feel so happy to come back to Skydive Carolina. When you are on the dropzone full time, it becomes all that you do. It becomes your entire universe and to me, that’s not healthy. That is how people get burnt out, and they can’t take it anymore. I need the balance in my life of traveling.

The other thing that keeps me at Skydive Carolina is the people … I don’t even know what the perfect adjective would be for the people of Skydive Carolina, but I have never seen a place with that many ridiculously nice and genuine people. The general mindset of everyone is to be helpful to each other.”

Giving Back to the Community

Skydiving is not a cheap hobby to pursue. A keen awareness of this irrefutable factor is what motivates Patrick to give back to the community when he can. 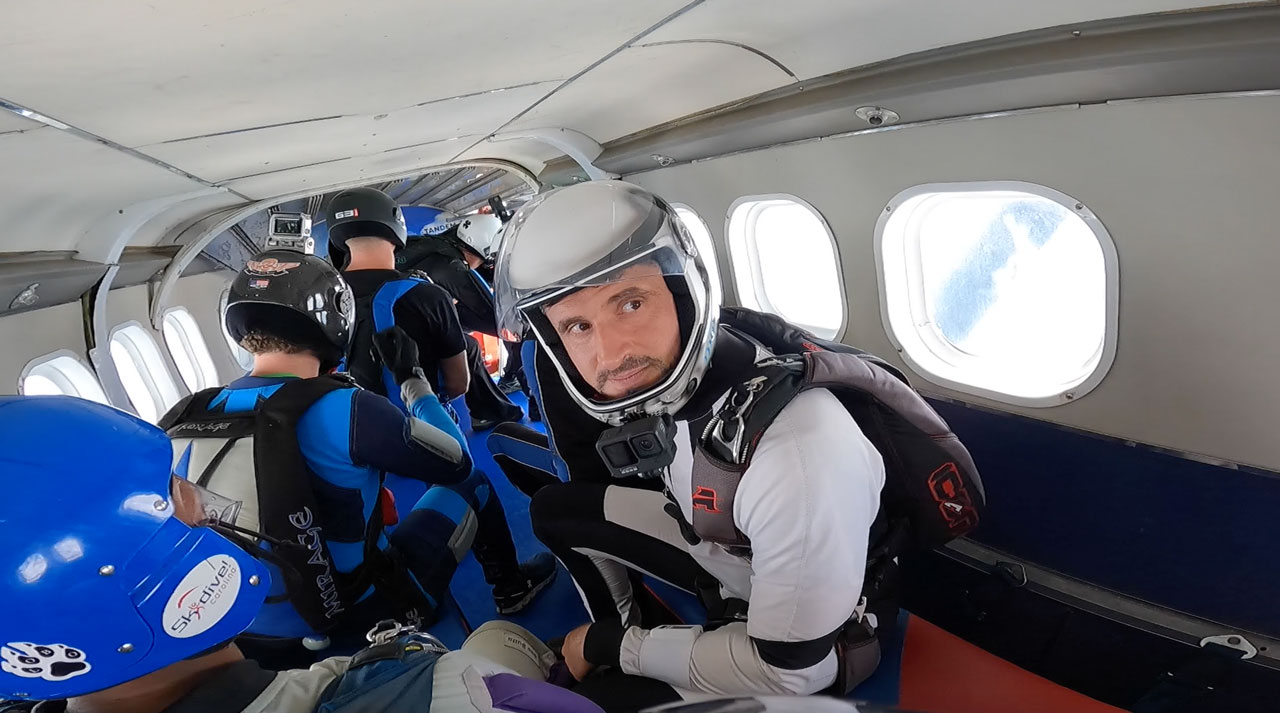 “[The expense] is the only problem with this sport. You can be a committed person, passionate about skydiving, but it’s not like basketball where you go every day and every night and shoot hoops. In part, it’s how much money do you have to spend for jumps, coaching, and tunnel flying. It’s so much money, and because I’m aware of this, I have never been a money-hungry person for the services I provide in this sport.”

Several times a year at the dropzone, Patrick will waive payment for filming the first tandem skydive of a fellow jumper or a staff member’s family or friends. He also keeps an eye out for other ways in which he can help; he remembers well how discouraging the cost can be.

“I remember times where it was so expensive that it almost made me lose my interest in skydiving. So, now that I can offer services, I want to give back.”

It’s one thing to have the intention to give back, it’s another matter entirely to “put your money where your mouth is.”

Piece of Advice for New Jumpers

In August, Patrick will be celebrating his 20-year anniversary in skydiving. After two decades and 10,000+ jumps, what is the most valuable piece of advice Patrick would give to a younger jumper? This is his reply: 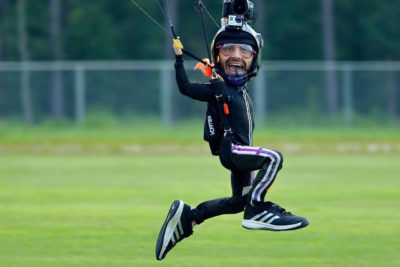 “Everyone wants to look cool and start doing freefly immediately, and yes, it is cool. However, it takes forever to really be able to actually master anything. If you’re going to spend money on something at the beginning of your career, it should be canopy courses. Flying your parachute is what it all comes down to. You can do whatever you want in the sky, chances of you getting hurt are really slim. Under canopy is where most injuries happen. Being really good under canopy should be the skill you master first. If you’re going to spend money on coaching, it should be for canopy. Once you are really good under canopy, then move on to developing those more advanced freefall skills.”

Oh, and by the way, once you’ve got those canopy skills in check, if he’s available, Patrick is more than happy to help you with your first steps toward freeflying!

Have you met Patrick yet? If you’re around the dropzone and happen to make out a distinguished French accent amongst the busy humming of the hangar, be sure to stop and say bonjour!