What's the Difference Between Skydiving and Paragliding?

In the relatively short period since humans first took to the air, we have devised a lot of ways to achieve flight. Some are very complicated, like rockets and helicopters – magnificent examples of combined knowledge and effort that allow us to zoom through the air. Others are simpler, such as the equipment we use for sports like skydiving and paragliding. Yet, in many ways, these more accessible technologies are just as spectacular. They allow us to achieve incredible thrills and experience the beauty of flight in a compact and affordable fashion.

Skydiving is when you climb into an aircraft, fly up really high, jump out and freefall for about a minute, then deploy a parachute for landing. Paragliding is when you take off from the ground by running down a steep hill with your wing already open – generating enough speed and lift to fly out and up from the terrain. 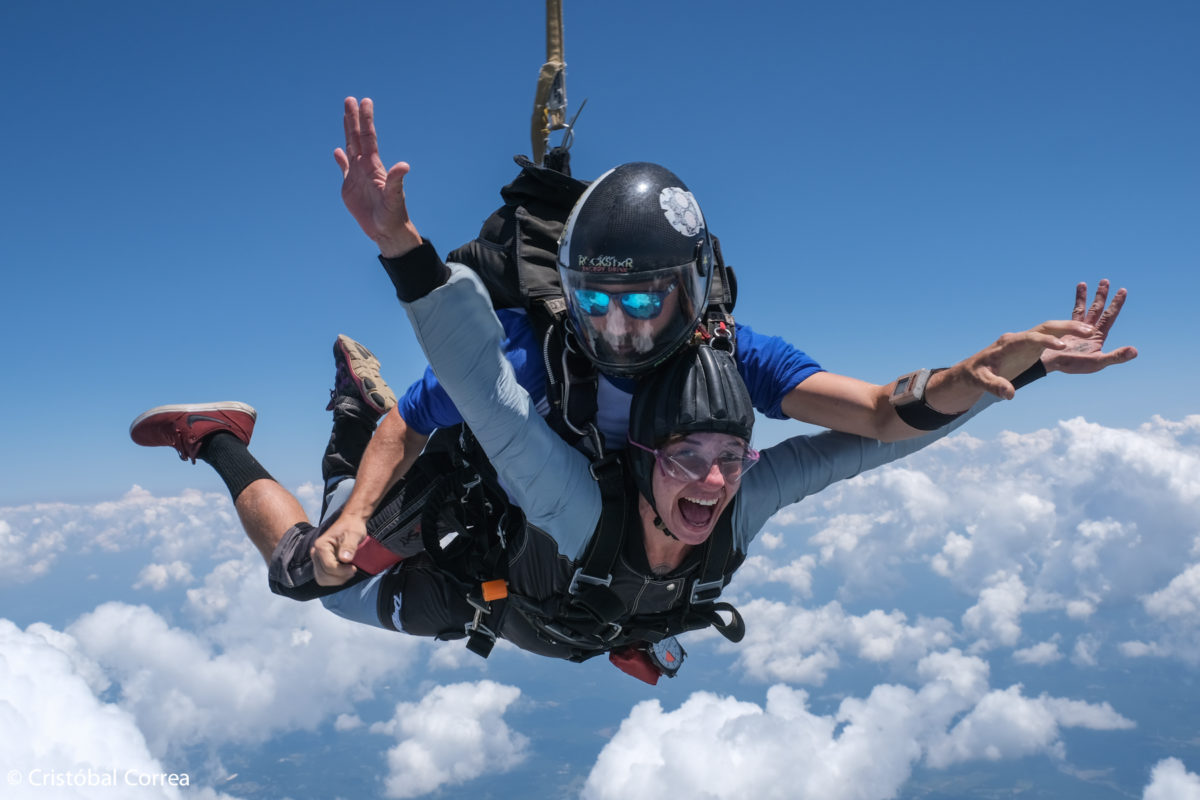 Skydiving has a lot to do with the freefall part, as jumping from an airplane and falling towards the ground at a terminal velocity of around 120mph is one of the most spectacular and exciting experiences there is. A skydiving parachute is designed and built to deploy smoothly from high speed, then allow you to fly back to the landing area and gently touch down.

The parachute part of a skydive is definitely not some kind of afterthought, though, as skydiving wings are amazing flying machines in their own right – and offer both dynamic flight or gentle soaring after the crazy intense rush of freefall. 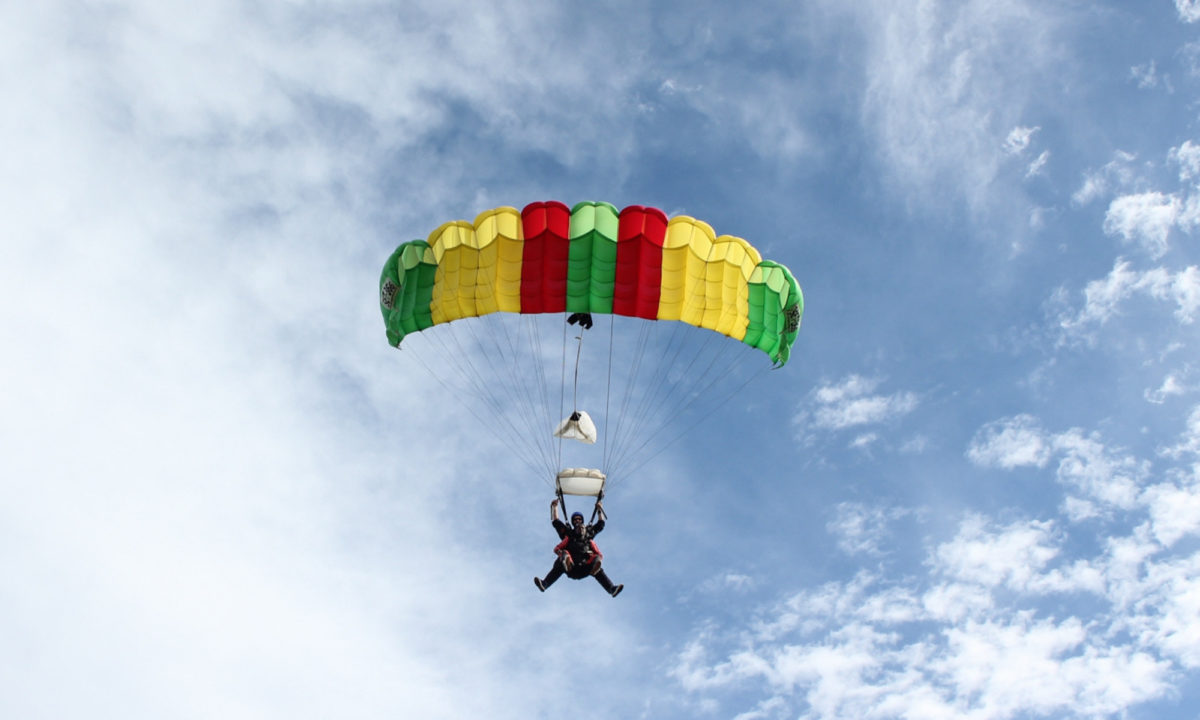 No Freefall or Planes in Paragliding

Paragliding is a more sedate affair. Still, a beautiful experience and fun to do, but it doesn’t typically occupy the same bucket-list urgency as is often associated with a skydive. Statistically, these aerial activities are much less risky than people generally assume – with both being safer than driving a car. Statistics suggest that paragliding (0.0074% fatalities/year) is not safer than skydiving (0.0004% fatalities/year). 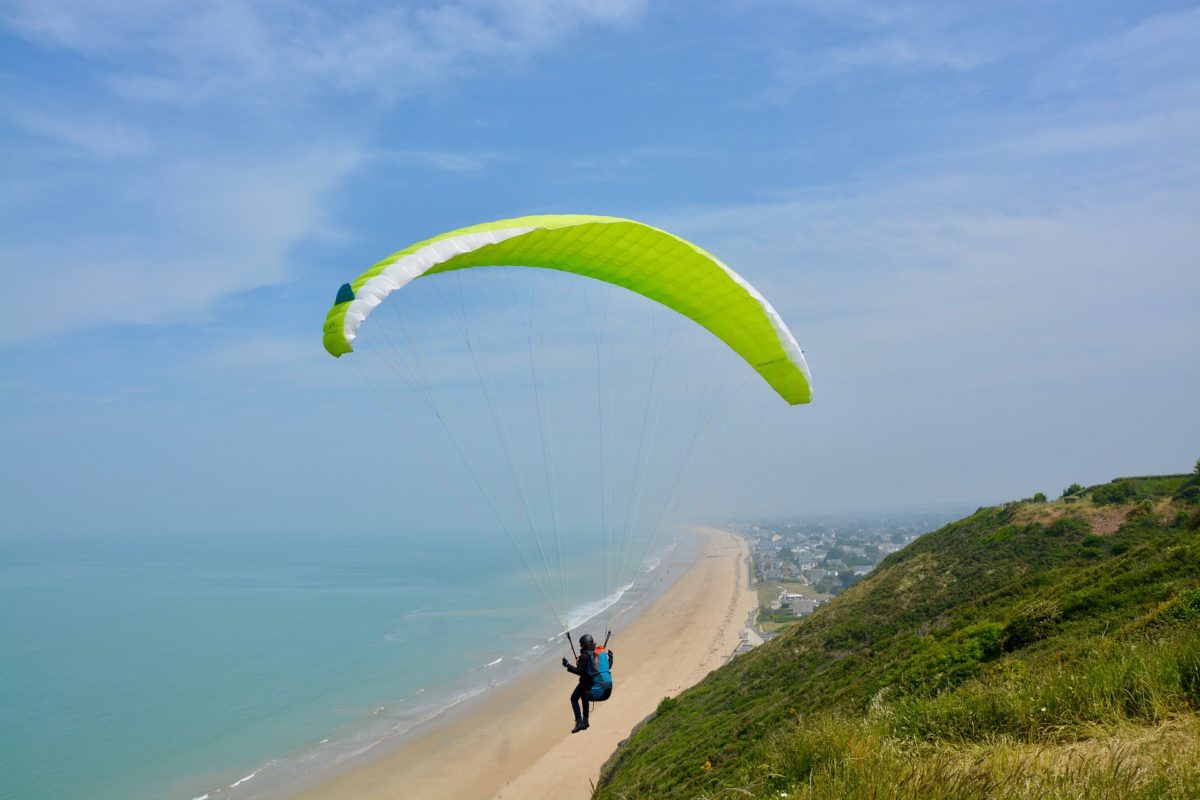 To untrained eyes, the wings used by skydivers and paragliders look pretty similar. Both are made from what is basically (albeit sophisticated) fabric and string and pack away into some kind of backpack. The main difference is that paragliders are much bigger, allowing for the pilot to achieve lift and gain altitude by riding on suitable air currents – while a parachute is smaller so it can be packed away into a portable enough container to be usable for freefall.

Skydiving parachutes are very good at their intended purpose and inflate into precisely controllable and responsive flying machines that are also designed to descend towards the ground. Paragliders are excellent for their desired use, and skilled pilots can achieve impressively long flights – but you cannot jump from a plane with one.

During landing, both types of wing use a ‘flare’ to allow the pilot a gentle touch-down. Flaring is when the pilot pulls down on both steering toggles at the same time, to level out the wing and create what is effectively an air brake. There is a bit of timing involved, but done correctly means landings are as gentle as can be.

Both sets of equipment use a reserve system, meaning that both a tandem skydiving system (‘rig’) and a tandem paraglider setup have an additional parachute in the unlikely event of malfunction. A skydiving reserve is largely the same as a skydiving main parachute. Although reserve rides are rare, it does happen and is a normalized part of the sport. In the unlikely event that you need to use your reserve while skydiving, not a lot changes about the jump – as during a tandem skydive the deployment altitude is high enough (4000-5000ft) to handle things in plenty of time.

In paragliding, the use of a reserve parachute is, again, very rare. Paragliders are larger and do not deploy while airborne in the same way, so pilots instead carry a round or square reserve parachute that is closer in design to that used in skydiving.

Skydiving and paragliding are often compared but, while they are related in some ways, they offer very different sensations. Flying around under a paraglider can be spectacular, but nothing comes close to the build-and-release of climbing to 13,500 feet in an airplane, opening the door, and leaping out into a gravity-powered plummet.

The added advantage of skydiving is that, while the subtleties between flying a parachute and a paraglider are many, a skydiving wing will give you a pretty good general idea of how paragliding feels. In contrast, a paraglider flight cannot teach you anything about what to expect from freefall.

The way into both sports is most often via a tandem experience. Skydiving or paragliding tandem means a single student paired with an instructor – harnessed together and using a single, larger version of the equipment that is specially designed for the size and weight of two people. This allows for the quickest entry into either a skydive or a paragliding flight, as the student can enjoy it with minimal training while the instructor handles all the technical stuff.

Although they are different sports, there is a direct relationship between skydiving and paragliding, and many skydivers are also paraglider pilots. Sometimes we go paragliding, but we skydive every day to introduce as many new people to our sport as possible. It is not a competition, but if it was – in our opinion – skydiving is impossible to beat as an experience you will treasure forever.

Ready to fly? Come jump with us!