In skydiving, the community is everything.

At Skydive Carolina, we count ourselves lucky to be the home dropzone of many truly remarkable people: members of the community who enrich our dropzone with their experience and expertise. As they humbly fly under the radar, many of their stories are widely unknown. The Local Legends series seeks to highlight and share some of their inspirational exploits and skydiving adventures. Up first is the one and only, multi-world record holder, Bruce Travis!

Easily identified by the deep bass timbre of his voice, his classic skydiving snack (Twizzlers), matching gear with purple accents, and marvelous mustache, Bruce is without a doubt a low-key local legend at Skydive Carolina. So, what’s his story? 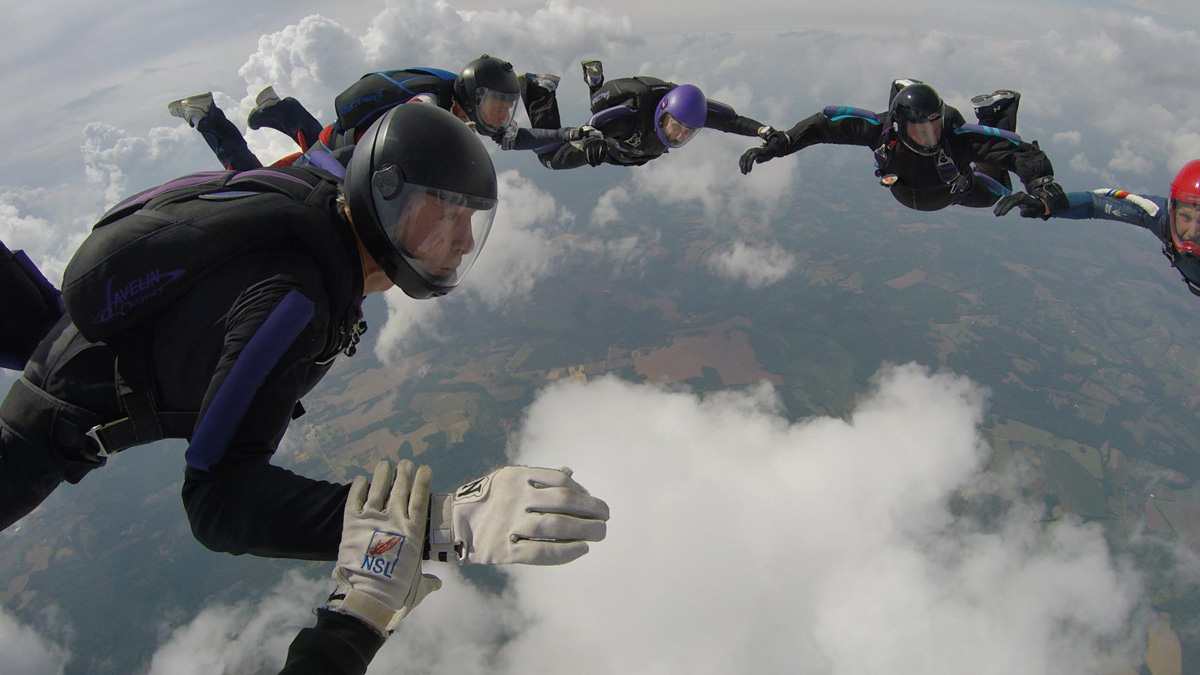 Skydiving Beginnings: Proud Member of the US Air Force

Like many in the late 1960s, Bruce was introduced to skydiving through the military. After serving as an Air Force electronics technician for several years, when the chance arose, Bruce volunteered to join a Special Forces unit. Subsequently, he was sent to jump school, and in 1967 Bruce began training with the 82nd Airborne unit. As luck would have it, Bruce was assigned to a jump unit with a Sergeant who ran a small skydiving operation in Sumter, South Carolina. In addition to providing a plane to jump from, Sergeant Jones also helped jumpers by providing affordable gear.

Bruce shared, “[Sergeant Jones] would take the military surplus parachutes after seven years and sell them. So, I got a surplus seven-year-old main and reserve, which Sergeant Jones had made steerable with modifications, a harness, and a container for $100. Way back then, you didn’t have places like Chester [Skydive Carolina]. [Skydiving operations] were run out of little camper trailers. So, we would jump at Sumter County Airport, and [Sergeant Jones’] sons would pack the main parachutes for a quarter. But I wouldn’t spend the money because that was money I could have spent jumping. At that time, it was about $2.75 to go to 7,500 feet.”

After serving his country in Vietnam, Bruce left the service and returned home to Montana to attend Montana State University. Naturally, he joined the parachute club and, as the captain of the Montana State Paracat Team, Bruce would periodically compete with the head of the University of Montana Grizzly team – an up and coming skydiving star with a name that would eventually become synonymous with big way world record skydiving: BJ Worth. In fact, in addition to Bruce’s notable skill, this early relationship would later help him to become a member of the prestigious World Team.

After graduating with a degree in Aerospace and Mechanical Engineering, Bruce sought to re-enter the military to become a pilot. However, because of hearing damage sustained while serving in Vietnam, he was unable to do so. Bruce then relocated to Florida where he worked for Pratt & Whitney designing engines for the fighter jet aircraft models, F-14, F-15, and F-16.

In the early 1970s, Florida was at the forefront of relative work skydiving, especially 10-way skydiving. During his time in Florida, Bruce was asked to join multiple 10-way teams. But as the sole breadwinner of his family, he couldn’t, in good conscience, fully commit to a team. After a year in the Sunshine State, Bruce could sense that a big layoff was coming as the engine design project neared completion. Seeking new opportunities in the burgeoning field of nuclear energy, Bruce would interview with several companies and, ultimately, select Duke Energy.

Bruce admitted, “The big part of my choice was the career move and what I could do for my family, but the other part was the biggest parachute centers around were Raeford and Charlotte Skydiving (the original iteration of Skydive Carolina) in Midland, NC.”

Competitive Skydiving In The Carolinas

From 1974 until the mid 1990s, the Carolina Parachute Council would host five meets a year. Though the focus was on Style and Accuracy at the time, there was a growing interest and competitive contingent in 4-way formation skydiving. After relocating to the area, Bruce would jump on teams with other several Skydive Carolina locals like Allen Broadway and rigger extraordinaire, Steve Vaughn. His participation in the Carolina Parachute Council for 20 years – in addition to knowledge, skills and coaching gleaned from members of the elite Golden Knights – enabled Bruce to hone his relative work skills. These were the exact skills that he would put to use as he became involved in big way formation skydiving.

On The Road To World Records

For some, achieving one World Record is a lifetime achievement; Bruce Travis has been on at least a dozen verified World Record skydives.

Bruce’s foray into big-way skydiving really took off in the early 90s. In 1994, BJ Worth formed the World Team—a rock-solid group of skydivers with one thing on their minds: building massive skydiving formations and securing world records. And, wouldn’t you know it? Bruce Travis was a part of the World Team from the very beginning. As a member of the World Team, Bruce traveled around the world to such locations as Russia, Slovakia and Thailand.

Bruce shared an anecdote about his first trip to Thailand:

“The very first time we went to Thailand was in 1999. We flew 24 or 26 hours to get there, and we arrived at 1 am. Nike was our sponsor, and so we had to wait while they gave us athletics suits, shoes, and World Team helmets. We finally got to bed at 3 am.

At 5 am they woke us up and drove us to the airport to do a 572 person jump into downtown Bangkok. I had never been to Bangkok in my life. It’s a city of 9 million people. And so they said, since the King is 72, we would be jumping from 7,200 feet. There were 6 C-130s flying at 90-second intervals going one after the other. Our landing area was a huge soccer field right in downtown Bangkok …

Well, I’m in free fall, and I’m half asleep. I look down and I see all these highrises, and I think where the heck am I going to land? Luckily, Roger Ponce was spotting our airplane. We landed downtown in the soccer field as the King’s guests, and all the citizens knew we were the King’s guests. They’d look at us and point to the sky, and we’d nod. They treated us like royalty. We were there for two and a half weeks, and it was great.”

Bruce would return to Thailand to be a part of the largest skydiving formation built to date: the 400 way completed in 2006.

With his wealth of experience and time in the sport, we asked Bruce for a bit of advice for new jumpers.

“The world has changed drastically, and so, my advice to new jumpers would be that I think one of the most important things you can do is to get good coaching. I’d have given anything if I could have spent time in the wind tunnel early. We learn through trial and error and can develop all kinds of bad habits. Even today, I’m trying to break some of those bad habits. I know the tunnel can be expensive, but there are things like the ICL Kicker. There are also lots of people who will help you–like Joey, Bill, or even myself.

Another thing is to make sure you jump regularly and to stay current with your emergency procedures. As a matter of fact, when I was out at Nationals this year, I had a malfunction. I made sure to go and thank Dan B.C because he has been a fantastic advocate for safety and when we were out at Power Play a few years ago he said something that stuck with me. He said we’re spending way too much time trying to analyze malfunctions as they are happening, and so, we get into analysis paralysis. So, when I had my malfunction at Nationals I remembered what Dan said. If it’s not right, cut it. That’s what the reserve is for.”

Wise words from a wise man.

Don’t be shy, say hello to local legend Bruce Travis the next time you’re out and about at the dropzone.