Three years ago, Medline produced the original Pink Glove Dance video to raise awareness for breast cancer. Since then, the video has morphed into a national competition for healthcare providers from around the country. The video has since generated more 13 million views on YouTube and inspired countless pink glove dance videos and events around the world.

In 2011, Lexington Medical Center (Columbia, SC) submitted a video that went viral on YouTube and won the 2011 competition besting hundreds of submissions from all over the United States. Their winning video has been seen more than 200,000 times and has raised big awareness for the Pink Glove Dance Competition . It was clear that the effort that went into the video was a massive one. (See the winning video here). So with the 2012 competition now here the defending national champions had to go even bigger than their 2011 winning effort. 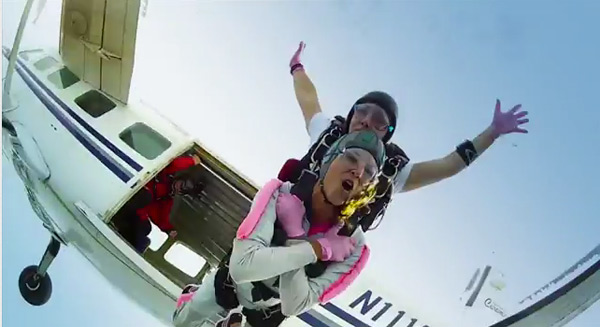 The featured performer for the video is a lady named Amy who has beaten breast cancer and is clearly living life to the fullest as a mom, wife, and lover of life. This is where Skydive Carolina was featured in the video. Amy joined instructor Ashley Fischer on a tandem skydive and absolutely loved it! The aerial footage was shot by Robin Kellam of Freefall Photo. Another part of the footage shows 8-Way Team Carolina TurbOcho (plus a few more of Skydive Carolina’s instructors) building a breast cancer ribbon while in freefall. That footage was shot by Chad Wilcox. The video has only been released for a few days and it has already been viewed over 20,000 times!

Have a look and please visit the competition page to vote for this video. Voting will end on November 2nd. Winners will be announced on November 9th. Good luck to Lexington Medical Center in their bid for another win!