How to Control Your Body During Skydiving

Interested in skydiving, but worried you’ll go tumbling through the sky, flopping about like a stuffed animal in the dryer?

If it’s any consolation, you wouldn’t be the first to experience anxiety about skydiving body control, and in truth, some do have to work harder to develop control than others. Regardless of whether you’ll have a natural knack for basic skydiving body positions or if you’ll need a little practice, our top tips for skydiving body control will help you start off on the right foot…or should we say wing!?

Either way, let’s not delay! 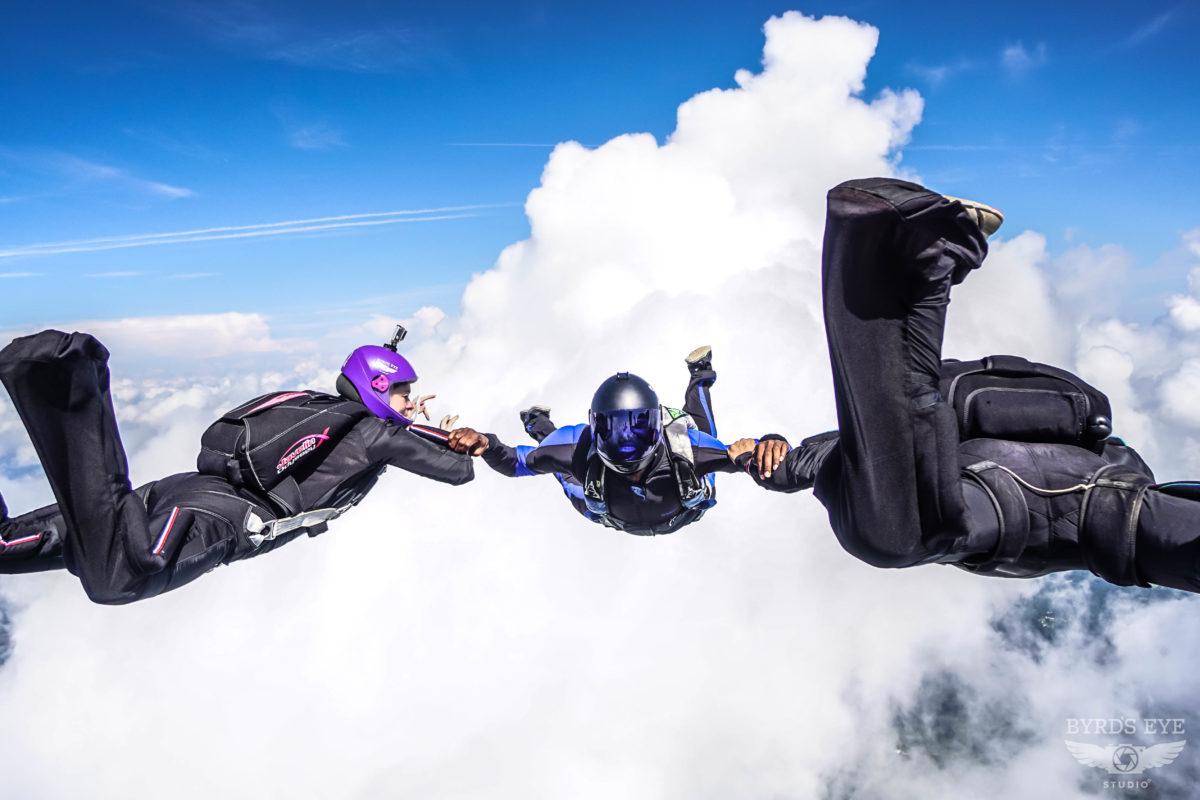 How do you control yourself while skydiving?

Skydiving body control is all about surface area and symmetry. While in freefall, we use our arms, legs, arching, and even de-arching to change the way that the flow of air interacts with us as we fall.

By changing the way air is deflected, we can maneuver around the sky. We can use different skydiving body positions to speed up, slow down, turn right, turn left, flip forward or backward, and operate on pretty much every axis!

Why do you put your arms out when skydiving?

Just like you can’t really effectively swim with arms and legs pinned to your side, neither can you skydive. During skydive freefall, the arms serve as a wing and are used to produce surface area. Putting arms out while skydiving assists a bit with stability, particularly on exit, but primarily allows for maneuverability while in freefall.

For example, on a tandem skydive, the tandem student will often actually exit with arms folded across their chest, holding on to the shoulder straps of the harness, or another spot the instructor has indicated. This is done to protect the tandem student from injury. Meanwhile, the tandem instructor will generally exit presenting to the relative wind with arms extended wide. This skydiving body position allows the instructor to quickly attain stability and the ability to deploy the drogue parachute.

Depending on the type of exit, student and solo skydivers will also exit the aircraft with arms extended – though, usually, at about a 90-degree angle rather than fully extended. Extending the arms on exit helps the individual to present their chest, stomach, and hips to the relative wind, which in turn, helps to maintain stability on exit.

Although extended arms are far more noticeable, it is actually the skydiving arch that does the most to enable individuals to maintain stability in freefall. 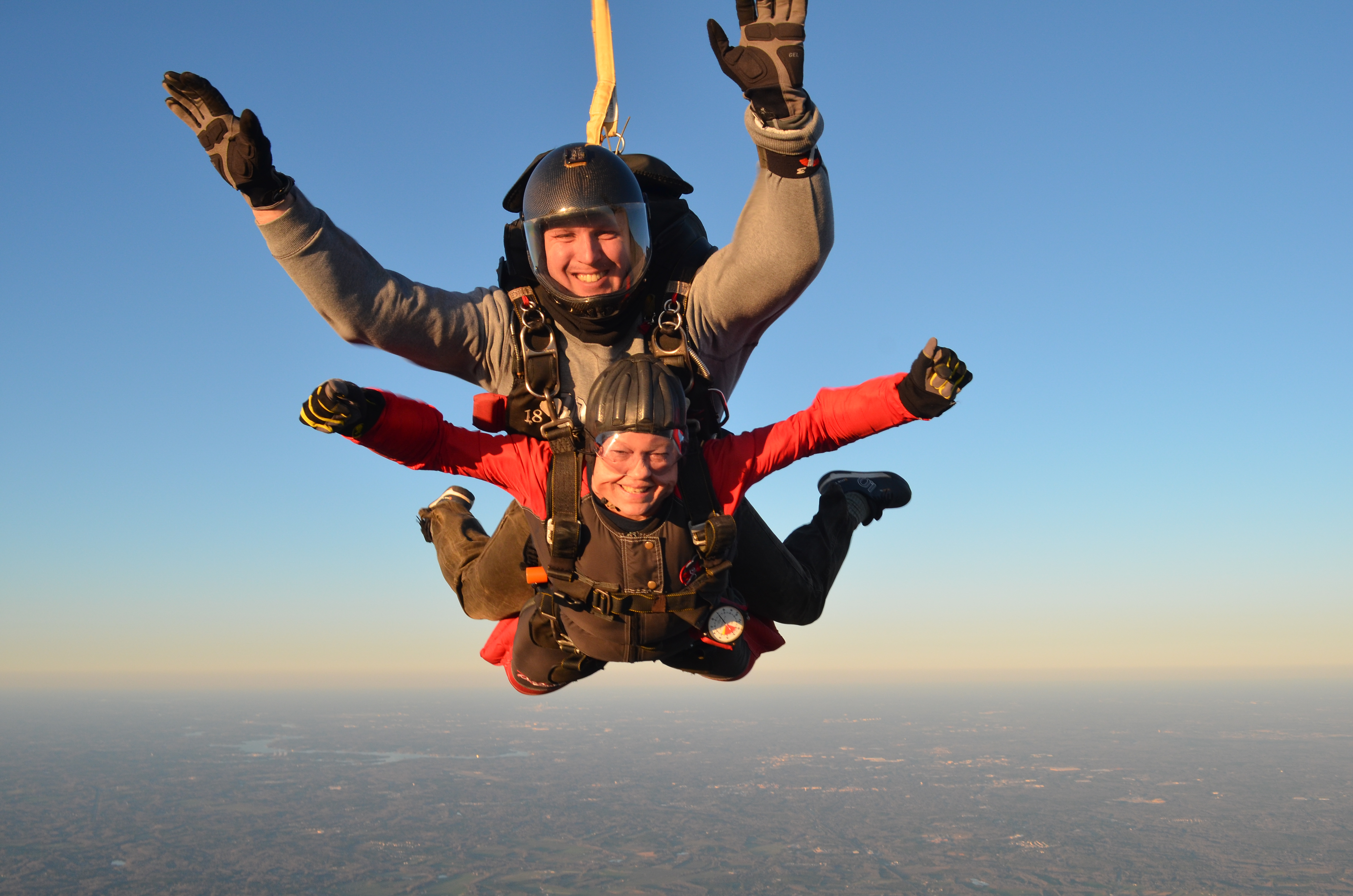 The following are the basic elements of skydiving body control.

Arch: The skydiving arch is a body position that resembles the shape of a banana where the hips are pushed forward and down to be the lowest point of the body and the head, shoulders, and legs are lifted. Having the hips and pelvis as the lowest point produces an aerodynamically stable effect, much like a shuttlecock in badminton.

Relax: We realize this one sounds a bit counterintuitive as you leap from a plane in flight, but the ability to relax your body will come in handy for skydiving body control. While in freefall, take a deep breath. There’s no need for your entire body to be tense. Focus on relaxing the parts of the body that aren’t needed for the correct skydiving body position.

Symmetry: In order to maintain stability and not produce unwanted movement during freefall, you will need to maintain a symmetrical body position: legs equally extended at about a 45-degree angle, shoulders even, and arms in a nice, neutral position each held at about 90 degrees.

The skydiving arch will come more naturally to flexible individuals. For those on the less-bendy side, you will need to practice these skydiving arch exercises in order to build the strength and mobility necessary to maintain the position in freefall.

Lay on a flat surface – if necessary, you can place a pillow beneath your hips for cushion. Then, while engaging your glutes and core, lift your shoulders and knees up off the ground. For beginners, hold this position for 5 seconds. As you build strength, hold the position for 10-second intervals without straining. While practicing your skydiving arch exercises, also practice controlling the symmetry of both your arms and legs and remembering to extend both legs slightly.

What we’ve described above is the basic skydiving body position that is used in relative work skydiving. However, within the wide, wild, blue yonder of skydiving, there are other body positions and types of body flight to explore. Did you know that by manipulating the position of your body you can fly in other orientations such as head up (like sitting in a chair but while free falling toward the earth), head down, or even at an angle across the sky!?

In skydiving, the sky’s the limit! If you can dream it, you can probably do it! Ready to try your hand at skydiving? Schedule your first jump with Skydive Carolina today!

Learn How to Skydive

Related Article: How Easy Is It to Learn to Skydive?