If you’ve ever visited Skydive Carolina, there’s a good chance you’ve seen (or heard), Jorge Alonso! Jorge brings the energy to our DZ with a simple goal… making everyone around him happy! Jorge’s energy is infectious and he delights in seeing first-time skydivers have a great skydiving experience. Get to know one of the bright lights of our community: JORGE! 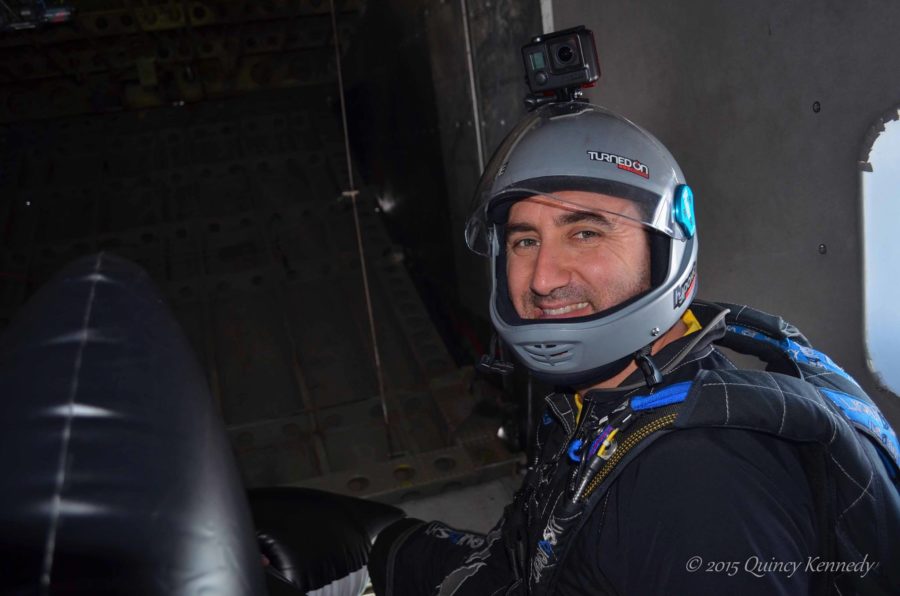 Jorge, you’re originally from the island of Puerto Rico. As a boy from the Caribbean were there any early indicators in your life that would indicate that skydiving would be such a big part of your life?

Yes, one of my school mate’s family owned the DZ in Puerto Rico and they always came to school with amazing stories about their skydives. 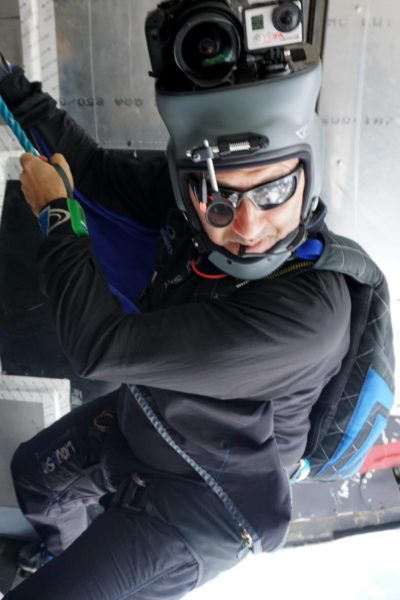 Where did you learn to skydive and what was the reason that motivated you to go to the dropzone to make that first jump?

I made my first jump in Pennsylvania at Above the Poconos Skydiving, I went to college up there and my senior year my roommate came back one Sunday with a video of his first jump. I asked him where he jumped and he said the DZ was only 30 minutes from our place. So, as soon as I graduated from college and received my first paycheck, I spent it on my first SKYDIVE!!!!

When you made that first jump, what about the experience did you love most?

Well, I was supposed to go with five of my friends, but they all bailed out on me, so I showed up to my reservation on a Saturday, and I learned very quickly that you need patience with this sport. We had low clouds all day and I waited in case it cleared. Well it didn’t, so no jumping for me, but everyone at the DZ was super friendly and I felt right at home spending all day there. They said call us in the morning and if we are jumping we will get you up!!! So next morning I woke up, called the DZ and they said “we are jumping”, so I got on my car drove to the DZ and in a matter of an hour I was on a Cessna 185, going up to altitude with my instructor Frank and videographer Darlene. So, what I loved the most was that being in the air and feeling the air of freedom hitting me in the face…..I knew that I had to do it again!

It has been made known that during your training, you once landed in a tree… what was that about?

Well, it wasn’t really during my training, I had around 70 jumps and it was my first time going to a big dropzone compared to Above the Poconos. A group of Hispanic skydivers where meeting at Skydive Crosskeys for one the “HISPAS” reunions. It was my first jump from a tail exit plane and we were dropped off very far from the DZ. By the time I opened and realized I was not going to make it back, there was nowhere else to go than a tree close to a street.

You’ve come a long way since that tree landing. Many people don’t know that you actually won a gold medal at the USPA National Championships as the videographer for Team Carolina Black Ice. Can you share with us a little about that experience?

Well I have always been into competitive sport since grade school, so once I learned that you could compete in skydiving, I knew that I wanted to be part of a team. I was working as a tandem videographer at Skydive Carolina and when the team asked me if I wanted to shoot video for the 8-way team and go to Nationals I couldn’t turn it down. The experience was unforgettable, showing up at Skydive Arizona, to compete among the best in the sport and being able to come home with a gold medal was amazing. The team we had was top notch, a great group of jumpers that came together and worked very hard. If I had the time I would compete again, I highly recommend everyone to at least compete once.

Of all the jumps you’ve made, what are three of your most favorite? 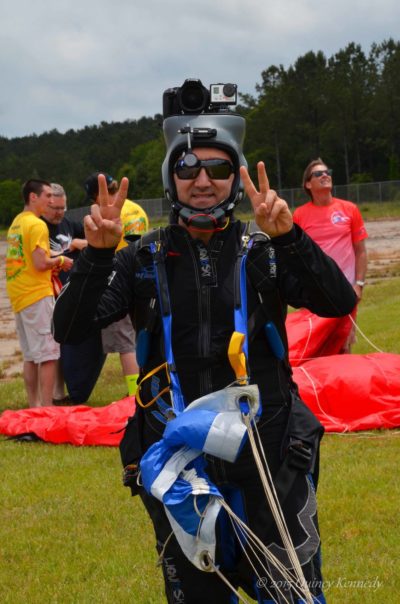 The first and second most favorite is a jump that Joe Jennings organized when I was living in Arizona and jumping in Eloy. We made 2 jumps sitting at a poker table. The first jump didn’t go as planned but helped us with the second one to be a success.

On the second jump, the table flew stable and we were able to fly the table until break off.

My third favorite jump was when I took my mom skydiving for the first time; it was in Puerto Rico and I took her for mother’sday. I wasn’t allowed to jump with her because I had less than 200 jumps, but seeing her face when she was at the door was a great bonding moment with my mom.

What is your proudest achievement in skydiving?

Winning a gold medal at Nationals for 8-way.

You’ve captured video of many first time skydivers and you’ve seen their emotions. What tips can you offer first time jumpers to ensure they have the best possible experience?

Smile. Many first timers always say that they couldn’t breathe during the freefall part of the skydive, but the reason for that is because they tend to hold their breath. If they smile they will be relaxed and breathing won’t be a problem. Also, make sure to interact with your videographer.

You’ve been involved with the sport for many years, what helpful tips would you offer newbies coming into the sport? If you want to work in the sport make sure you become a good belly flyer.

For those interested in flying with a camera, what’s the best advice you can share to help them progress towards their goals?

Shoot video of other jumpers. Anytime you see a group going up for a jump, just ask them if they don’t mind you shooting outside video. Before I joined the 8-way team or started working as a tandem videographer I probably had more than 100 video jumps. Also, make sure to talk to an experienced videographer to ask for help with what equipment to get for a camera helmet.

What is something about you that few people know about, but would be surprised to learn?

Puerto Rico has been in the news a lot following the destruction from Hurricane Maria. How much of your family still lives there and how are they doing? Is life getting back to normal?

I still have many family members in PR, from my immediate family, my mom, and two siblings. They are all doing well now but it was hard for them, My mom lives in front of a Children’s Hospital, so she got power back before most of the island.

You’ve always been athletic, but your job caused you to travel a lot and through the years of being on the road, you self-admittedly started to gain a lot of weight. You then suddenly registered for a marathon (and all your friends thought you were nuts). What prompted you to go to such an extreme and what was the experience like?

In 2012, I went to the doctor for a check-up and the doctor told me that I had high triglycerides. He said that it was time to get healthy. I started eating better and once I lost 10 lbs, I started running and I was doing about 3 to 4 miles a day. I exercised every day. One day my brother asked me to sign up to run the Marine Corps Marathon with him. I never thought I could do it. I told him that I would think about it during my daily run… well, that day I ran 6 miles which was the longest I had ever ran and it felt good and I decided that I would sign up. My brother didn’t know that I signed up, I wanted to surprise him by running the marathon with him.

Since that first race, you’ve become a serial marathoner. How many have you run and do you have more planned in the future?

You live in Charlotte but haven’t run the Charlotte Marathon. What’s the appeal with Chicago?

The appeal to Chicago is for two reasons, one is due to the course being mostly flat and the second is that the entire city comes out to support the runners. You have 26.2 miles of fans out there.

You can now call yourself an experienced marathoner; what advice would you give to those who want to knock this off their bucket list? Where should they start?

My advice is, just do it! Start running and your mind will take over and before you know it you will be running long distance. You will be in shock everytime that you beat your previous mileage.

Between extensive world travel, skydiving, SCUBA diving and marathon running (did we miss anything?), you’re living a life that most people only dream about. What motivates you to keep doing such awesome things?

Death motivates me, knowing that one day I will die, is a reminder that I have to live my life to the fullest so when the day comes, I can say that I did as much as I could!

Who or what inspires you?

My family. Almost everyone in my family lives their life to the fullest. My uncle who is 91 years old, still loves to dance and still goes to play tennis daily. Especially my mom, she was a hard working single mom that provided for 4 kids and raised all of us to be successful. From what I can remember we had some up and downs, but she was always positive and made the best of it.

Is there anything else that you’d like to accomplish? If so, what and why?

I would like to get my private pilots license, would love to fly myself places.

What failure in your life set you up for later success?

I really cannot think of a major failure other than flunking a class in high school and having to retake it over the summer, it taught me to take care of things at the moment and not wait until later. It was my worst summer ever….

Favorite Movie of All Time (for those that don’t know, Jorge is a serial movie watcher):

Best aircraft you’ve ever jumped from? 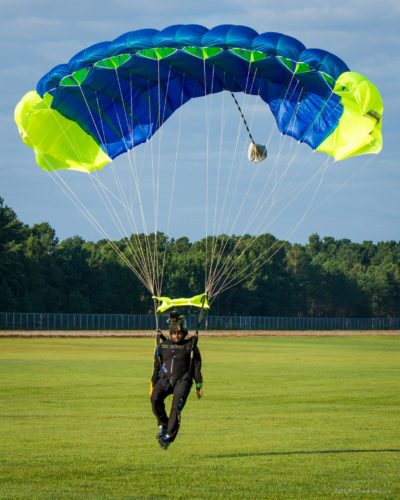 Wow, I have a couple of favorite shows, The Amazing Race is in the top, I would like to compete in one of the seasons, but also enjoy watching NCIS, Criminal Minds, and Suits.

Most used app on your iPhone?

If you could make a skydive with two people in the world, who would they be?

i). My good friend Pete (Lobo), would like to jump with him again. I miss him a lot.
ii). My aunt, she passed about 4 years ago, I think she would have loved it.

Best place you’ve ever traveled to within the US?

There’s many of them, one place, in particular, is the Grand Canyon.

Best place you’ve ever traveled to outside of the US?

Place you’d most like to visit that you’ve never been to before?