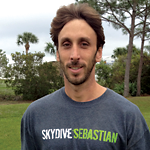 Luis Prinetto, D-30217, is well known on the boogie circuit as a freefly organizer. He was on the 138-Way World Record for Largest Head-Down Formation in 2012, as well as the three previous head-down world records. When he’s not on the road, he spends his time flying at Skydive Sebastian in Florida, where he’s launched his canopy and freefly training school, Fly4Life.

Pet Peeves: People asking for skydiving advice when they are drunk out of their minds at a party. Flyers not paying attention on dirt dives.

Life Philosophy: Breathe and be aware of your body and environment.

Jump Philosophy: Open your mind; no matter how experienced you may be, you’ll always find someone you can learn from. Have all your senses focused on it at all times so you can learn from every situation, good or bad.

Total Number of Cutaways: Six. One from my own pack job.

Did you start out as an AFF, static-line, or tandem student?
I started IAD [instructor-assisted deployment] in January 1998. Very sketchy. [My] first jump was the scariest thing I’ve ever done, but once I landed, it all changed.

What safety item do you think is most important or most often neglected?
Communication with other groups on the load and the pilot regarding jump run (type, speed, direction) in order to achieve the best separation while tracking and under canopy.

Do you have any suggestions for students?
Keep your eyes and mind open. Find people to learn from who can offer you advice on how to achieve your goals in the sport. Ask questions no matter how stupid they may seem. Learn about your equipment.

What has been your most embarrassing moment in freefall?
Taking out a small belly-formation when I had just under 1,000 jumps. That day, I decided to learn to fly on my belly, since it actually is a little part of freeflying.

The toughest thing to do in the sport of skydiving is:
For people to remember to keep having fun as they learn and do whatever they do in the sky. Skydivers [who are] frustrated with positions and moves they are trying to learn focus so much on where they want to be instead of enjoying where they are. So many instructors [who are] not happy with their jobs end up only doing work jumps and forget what a fun jump is. Enjoy flying!

What was it like to be on the 138-way head-down world record jump?
It was awesome to see how everything came together so well after all the preparation that led to it. With vertical formations, it was the first time that selection camps were done around the U.S. and Europe. This made it possible to choose the best, most current flyers around the world to form the team. As always, Skydive Chicago [in Ottawa, Illinois] did an excellent job hosting the event and making sure everyone had the opportunity to share a great time in the sky and on the ground with friends from around the world. It ended up being a complete success.

You travel extensively, coaching and organizing. Is talent growing pretty equally, or do you see pockets of talent?
I would say the talent has been growing exponentially all over in the last two years or so, a lot of it with the help of tunnels, which are starting to pop up everywhere. At the same time, you can probably see certain areas where the improvement is more noticeable. I would say those are close to big DZs and/or tunnels, which generally get more traffic from highly experienced coaches and flyers.

What is Fly4Life?
Fly4Life is a team dedicated to the progress, training, education, promotion, and enjoyment of human flight. It was created with the idea of bringing flyers together in order to share ideas, knowledge, etc. In addition, Fly4Life coaches and organizes at DZs and wind tunnels around the world. We are based at Skydive Sebastian but travel extensively during the summers. Fly4Life promotes safety and advanced flying techniques, while in a relaxed and fun environment. The website will be launching soon: teamfly4life.com.

What do you enjoy most about organizing?
The best thing about organizing would be the opportunity to fly with people of all skill levels, ages, and nationalities and, hopefully, getting to teach them something while having a good time. I enjoy traveling to events around the world, while [experiencing] different cultures and food and meeting people [with different] flying styles and interests.

What do you consider your most significant life achievement?
So far, being able to live by doing one of the things I love the most: flying.

How did you become interested in skydiving?
[I was] seeking adrenaline, having no idea of what I was really going to find.

Who have been your skydiving mentors?
Hard to say. When I moved to the U.S., I was flying at Skydive America in Pahokee, Florida. I would have to thank many of the DZ staff, the DZO, and especially the members of the Freefly Circus.

Most people don’t know this about me:
I used to play water polo professionally in Venezuela.