Nothing But Calm: SKYDIVING FOR THE FIRST TIME

April Freeze is one brave lady. This single mom of four kids (“I claim five, though,” she notes, proudly mentioning her twenty-year-old non-biological daughter) owns and operates her own business, homeschooled her children, loves God fearlessly and always makes time for a good adventure.

“I like hiking, kayaking and exploring new places and traveling,” April laughs. “I do have a fear of heights, though, believe it or not.”

That fear of heights almost kept her from skydiving. Almost.

“I have seen a couple people I know skydive,” April says, “and I thought it was totally awesome.  I thought how wonderful it would be if I could do that, but I wasn’t sure if I would ever get the guts to do it.” 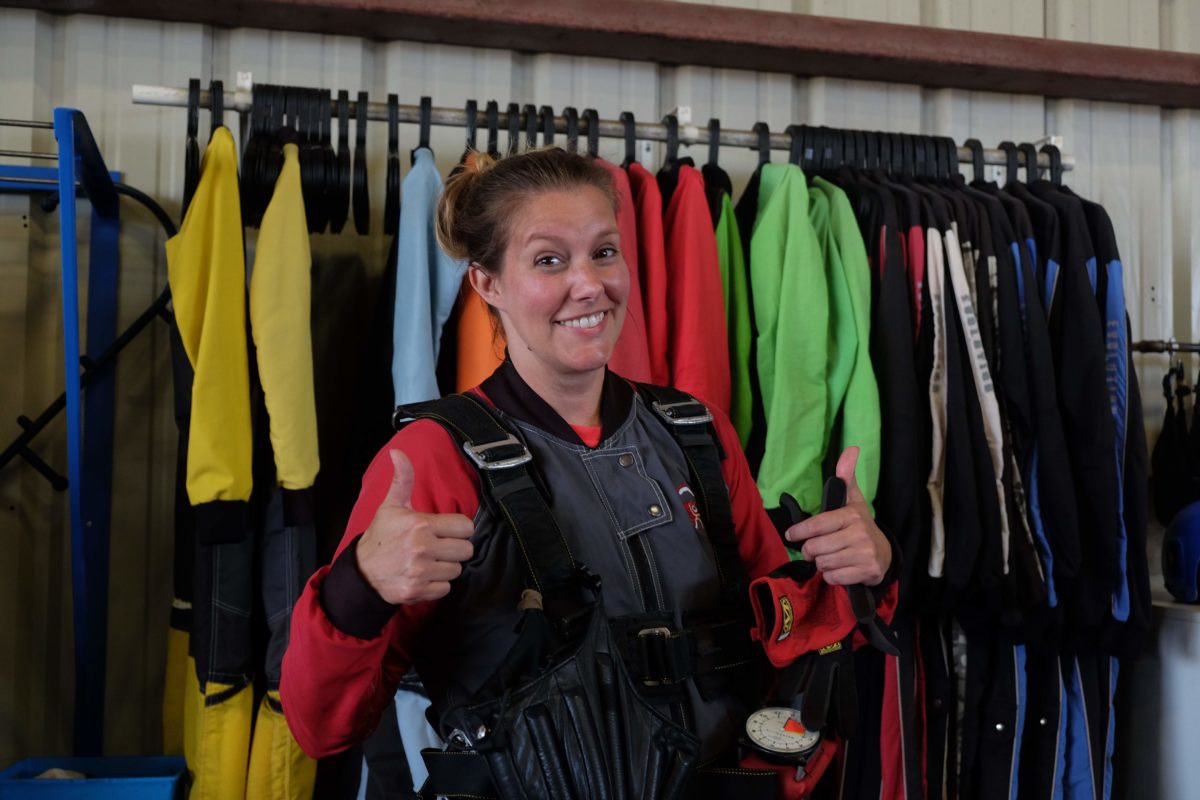 “Then I ended up meeting–well, re-meeting–someone I went to school with,” she continues. “We’re dating now, but at the time we weren’t. His name is Chad. He was telling me all about his experience, and I remember that one of my first comments was that, if I was going to skydive, somebody would have to push me out of the plane. I thought there was no way I’d jump out of an airplane.”

“The way he talked about it won me over,” April glows. “He was not pushy. He just talked about how exciting it was; how amazing of an experience it was.”

It wasn’t long before the pair ended up here at Skydive Carolina. They had originally planned to go check out another place close to where April lives, but when they called, that operation was closed for the weekend.

“Then we found out they were doing the Carolinafest boogie that same weekend,” April says. “We drove 2 1/2 hours to get there, totally pumped up the whole way! Chad said, ‘Heck, we should jump,’ and I was, like, wait...we? I let it sink for a while, and after that while, I realized that yes, I was going to do this.”

“Once I made up my mind to do it,” she continues, “I was determined that I was going to let nothing stop me. I didn’t tell anybody I was going to do it–not even my mom, not my best friend, nobody. I figured all it would take would be one person saying something negative and I would get nervous. I wasn’t going to let that happen.”

While April and Chad waited for their jump, they continued to take in all the Carolinafest excitement surrounding them. April, especially, delighted in “watching people go up and down and up and down,” packing their parachutes and chattering excitedly all along the way. Finally, it was time for April to sit down for the first-jump class.

“The personnel there, the people that checked us in and did the class, the instructors, the photographers…they were just so nice,” April remembers, “and I felt like they were really thorough. They made me feel comfortable and made me feel sure of what I was about to do.”

“It sounds funny, but it really helped to have the photographer interviewing me and asking me questions,” she adds. “I really thought that fear would take over, But, by the grace of God, it did not. There was so much excitement there I didn’t have time to think about it.”

Before she knew it, April and her paramour were all geared up and walking to the plane with their respective instructors. Being in a small skydiving plane was, of course, a new experience for April. The first 6,000 feet had her a little spooked–but, like a flash of bad weather, the nervousness suddenly cleared. When the door opened, she was ready.

“It was, like, okay–the moment is here! I’m not flying back down in this plane,” she grins. “I could not stop smiling. Even right now telling you about it, I can’t stop smiling. That’s how I felt the whole time. I was grinning from ear to ear.” 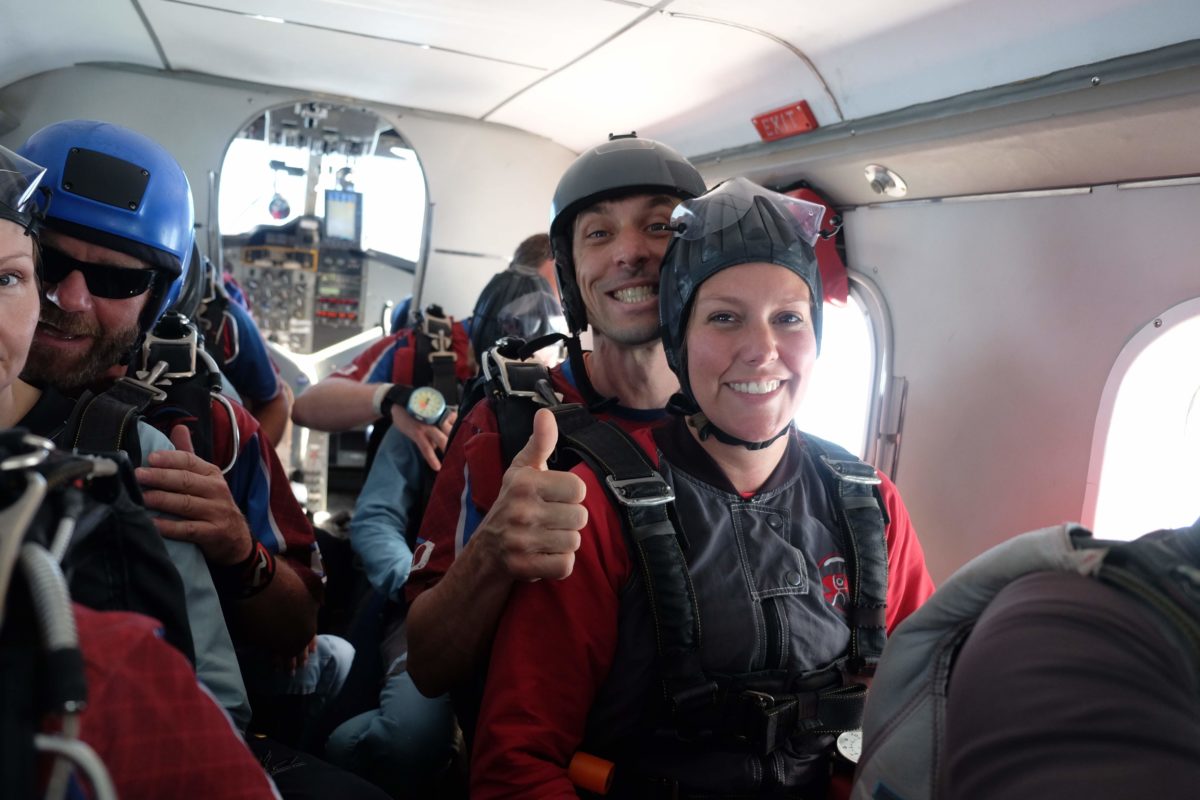 “They had already told us what to expect,” she adds. “What to do, and all that, so when the instructor got up and started walking to the door, it was like clockwork. Here we go. And then we were out! It was breathtaking.”

April reports that she was enormously surprised by how peaceful it was up there, thousands of feet in the air.

“Even though you’re falling thousands of feet in such a small amount of time,” she smiles, “there was such a sense of peace. Nothing but calm. No fear. No worries. Just taking in the beauty of the earth below and the curvature of the horizon. Seemingly suspended in air for a brief moment of time.” 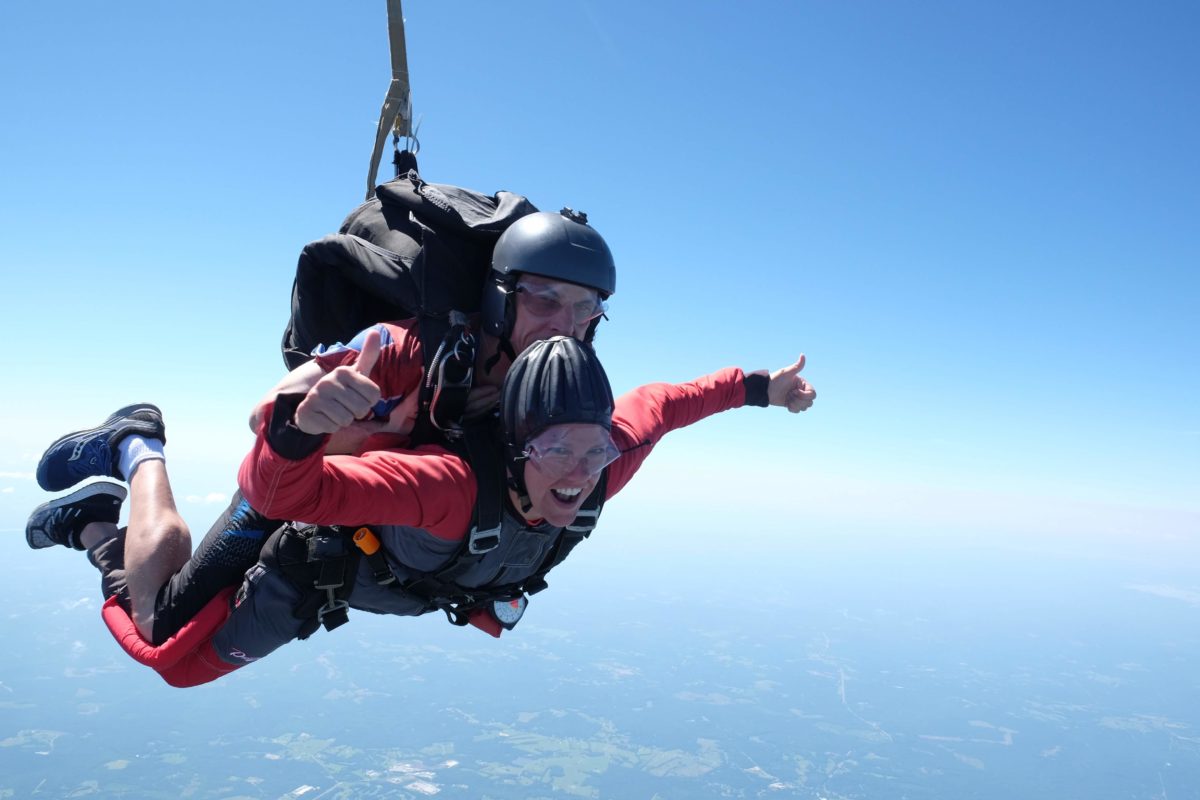 After freefall was over and the parachutes deployed, Chad’s and April’s instructors coordinated a special treat for the pair: a little formation flight, so they could get close enough to see each other’s faces and wave. April found the experience “really special.” (Never let it be said that we don’t love a little romance here at Skydive Carolina.)

She was also amazed by the amount of control that the pilot had over the direction of the parachute. She was impressed by the fact that such simple controls were able to maneuver the pair so easily and target the landing so precisely.

“My instructor, Gene, kept me in the loop on what was happening and what to expect,” she says. “He even allowed me to take the controls for a little bit and go in the direction I chose.”

“I thought the landing would be rough,” April says, “but it was easy peasy. It was so smooth, and all I could do was just sit there and look up and think, ‘Wow. I just did that. I just jumped out of an airplane at 14,000 feet.’”

“Since then–and I’ve told Chad this a million times, and I’ve told other people this, too–I really feel like I’ve changed. Sometimes in life, you do things that make you anxious; that overwhelm you; that make you think you can’t do them. That was my most feared thing ever–falling, and heights like that–and to overcome that kind of fear is huge. Now, every time I face something that’s the least bit anxious, now, I’m like–I’m good. I can do this.”

April is using her newfound chutzpah in an inspiring way: to go on her very first mission trip, to Honduras.

“I know there are a lot of things I don’t know about this trip,” she insists. “and that I have no clue I’m walking into. But it’s okay. God’s got it, and that’s all I need to know. Skydiving has inspired me. I’m going to experience all I can. I’m just, like, bring it.”

If you’re curious about the idea of jumping out of a perfectly good airplane, April has some advice for you.

“Go for it!,” she enthuses. “Do not hesitate. Don’t think about it. Just make up your mind that you are going to do it, and do it. There is no way on earth you will regret it afterward. It will really pump you up. Not just pump you up, but encourage you to do other things you may be thinking you can’t do–but you can.”

Do not hesitate. Don’t think about it. Just make up your mind that you are going to do it, and do it. There is no way on earth you will regret it afterward

“I’ve had a few people say, Have you lost your mind?’,” April laughs. “I say no. Actually, I found it. I feel like I gained lots of new ground and lots of insight by just challenging myself like that. And I recommend it to anyone.”

Ready for the adventure? Book your tandem skydive at Skydive Carolina and try skydiving for the first time!