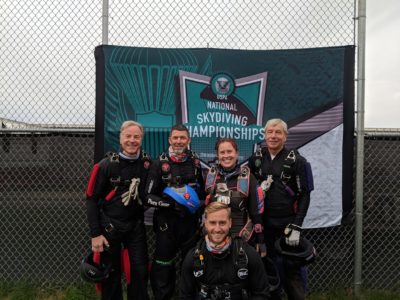 Why I started skydiving: I have always wanted to since I was a kid.

Bruce Travis:
I started jumping in 1967 as a member of an Air Force Combat Control Team providing close air support for the 82nd Airborne in Vietnam. I have 8575 jumps and 140 hours of tunnel. I have about a dozen Nationals metals in 4, 8, and 16 way. I have participated in in about a dozen big way world records, including the current 400 way, three point 217 way and four point 57 way (SOS). Skydive Carolina has been my home DZ since 1986 and I have been a member of CarolinaIce (off and on) since 2005. I am truly blessed to have SDC as my home DZ.

Never got an A, B or C license

1984 Nationals Round Six 8-way competition Our lead was large enough that we could score a zero and still win. We did win, and we did score a zero!