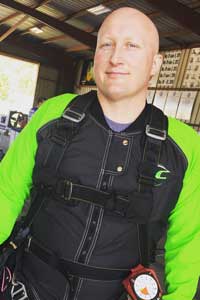 In November of 2015, David Nance was turning 38. Just two years before his 40th, David felt the need to attack the item at the top of his bucket list: go skydiving.

His friend, Sean Blanton had been talking about how great the experience was and David felt that if he didn’t do it soon, it might be something that would get pushed aside. He mentioned to his girlfriend that skydiving was something that he wanted to do, and so she purchased David a gift certificate to go skydiving.

Raised in Florence and now working for The State newspaper in Columbia, David has enjoyed challenging himself. Following high school, David focused on a career and through the grind of trying to prove oneself and ‘make it’, started to lose the game of work-life balance. He put on weight and following a neck injury in 2007 playing flag football, put on even more weight. Feeling depressed and debilitated, his doctor suggested he start running.

David’s life changed once he began running. What began as a struggle to run a mile eventually led to his first 5K which led to his first ultramarathon one year after he first started. The taste of being challenged, peer pressure and having a structured training program appealed to him to the point that he ran his first six ultras, all 50K trail races, before running his first road marathon. Today, David is in an elite group of runners – ultra-marathoners! (People say skydivers are crazy; we think this kind of activity is nuts!) The typical distance for an ultra-marathoner is 50K (31miles). David’s longest completed race is an amazing 100K!

Above: David exits the Caravan from 14,000 feet with instructor Doug Barron.

We met David and learned of his story after his skydive, and we were inspired. Here’s someone who found himself in a rut and then decided to change his life. Part of that journey in living a full life was also skydiving. Of course, we had to ask him about his jump experience:

What did you think of your skydiving experience?

“To date, it’s at the very top of my adventure list. I’ve spent some time on the Appalachian Trail and have done other outdoor activities, but nothing presented the risk that I faced with skydiving. It was one of the most amazing experiences I’ve ever had!”

What surprised you about the experience?

“People can tell you what it will feel like, but it doesn’t prepare you. Ultimately, the feeling of freefall surprised me the most. At no point did I feel like I was falling. I could feel my cheeks flapping in the wind, but that was the only real indication that I was falling. It was surreal in that it felt like I was floating. The best way I can describe the feeling is floating weightlessly in a pool. It was extraordinary.” “The other thing that surprised me was how quiet it was under canopy. It was such a contrast from the noisiness of the free fall experience.”

“Honestly, nothing. I suppose that it ended. It happened so quickly. Between a minute of free fall and about five minutes under parachute, I just didn’t want the experience to end.”

Would you recommend skydiving?

“I’d recommend it to everyone. I’d especially recommend Skydive Carolina. Everyone we came in contact with was incredibly friendly. My tandem instructor and camera flyer were professional as well as the office staff. I think everyone should do it.”

Skydive Carolina is located 50 minutes north of Columbia, SC and has been serving its adventure enthusiasts since 1986. A straight shot up I-77 North, Skydive Carolina is the closest skydiving location to Columbia. If you have questions, please feel free to contact us or view our skydiving frequently asked questions page.