Skysurfing is a type of skydiving. The skydiver attaches a sky surfboard to their feet and uses it to perform tricks and acrobatics in the sky. A sky surfboard is smaller and flatter than a surfboard you’d see in the sea and looks more like a snowboard. Skysurfers start with very small boards and gradually work up to larger boards as their skills improve.

Here at Skydive Carolina, we were very lucky to have skysurfing displays at CarolinaFest, our annual skydiving boogie. Sky surfing isn’t as well known as it once was, so we thought we’d take some time to chronicle the evolution of this legendary skydiving discipline.

All photos in this piece by Raymond Adams.

Skysurfing was originally invented by French skydivers, Dominique Jacquet and Jean-Pascal Oron in the 1980s. They could see how surfing in the sea was popular due to the fact that the surfers were able to ride the waves, and questioned whether the same could be true in freefall. What they found was that the sky surfboard did indeed allow the rider to go ‘surfing on air”, with the waves of the sea now replaced by the relative wind hitting them as they fell through the air.

Take up of the sport was fairly slow at first, purely because not many people knew how to do it and therefore there weren’t many people to teach new skysurfers. It became more popular in the 1990s, however, during a time when skydiving as a whole was evolving and disciplines like freestyle and freeflying were becoming more mainstream.

During its peak in the late 90s, skysurfing was very popular – something that was no doubt helped by the fact it featured in television adverts for big brands. Sky surfers competed against one another to win prestigious skysurfing titles and the sport was featured in the ESPN X Games from 1995 to 2000.

The main piece of equipment – aside from the usual skydiving equipment like a parachute – is, of course, the board.

As we said earlier, the sky surfing board is much smaller than what you’d typically think of as a surfboard. Some are as small as a foot in length, the idea being that new skysurfers start with something that has very little surface area, and progress into larger boards as they learn more. The reason for this is that greater surface area of the board means that it will be more affected by the wind hitting it, making it harder to fly.

The sky surfboard itself is also quite flat in design, more like a snowboard than a board for the sea. It is attached to the sky surfer’s feet, but unlike a snowboard, the skydiver wears his/her normal jumping shoes, rather than needing special boots.

The attachment of the sky surfboard comes with a cutaway system, which is a quick release system that allows the skydiver to quickly remove the board if they need to. For landing, most skysurfers loosen the board and then kick it off just before coming in to land – though there are some who surf it in across the ground, which is very cool to watch! Check out this video of professional skydiver, Troy Hartman, sky surfing in San Diego.

Sky surfers, for safety, also wear audible altimeters. These are devices that sit inside the helmet and which beep at certain altitudes to remind the jumper where they are and when it’s time to deploy their parachute. This is common across all of skydiving, and means we aren’t at risk of getting lost in the moment and forgetting to deploy amid all the awesomeness of the jump!

The main barrier to entry in skysurfing is that it is a very high-speed sport with inherent risks given how the board behaves in the air and due to the fact the skydiver’s feet are secured in a fixed position.

The nature of filming skysurfing means that it appears to be very slow, as the sky surfer surfs the air, but the reality is that skysurfers fall faster than any other type of jumper. This in and of itself has risks, because a wrong movement could potentially result in a very fast, possibly unstoppable spin. 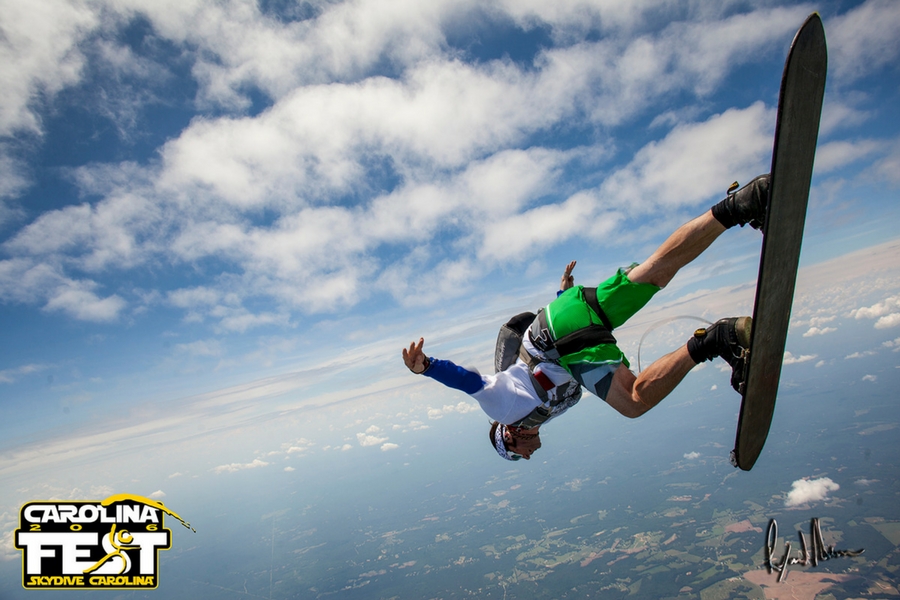 With that said, skydivers can learn to sky surf if they want to, but it does require some additional qualifications. Firstly, and obviously, they must be a qualified jumper to start with. They must prove their ability to fly safely post-qualification, and then be able to fly in different orientations in freeflying.

Once they have achieved a level of proficiency in both flying head up and head down (so in a standing or seated position, or literally with their head pointing toward the ground), they are able to start learning to sky surf.

Beginner sky surfers will start with a smaller sky surfboard, usually a maximum of two feet in length, before progressing to larger boards as they get better.

The Declining Popularity Of Skysurfing

It’s fair to say that skysurfing today isn’t nearly as popular as it was back in its hay day. There are fewer sky surfers now and many people put attribute that to the rise in popularity of other disciplines such as wingsuiting and VFS (vertical formation skydiving), which themselves also require advanced skills.

There’s also the fact that a declining number of sky surfers means fewer people to teach new people. This reduced availability of expertise makes it challenging to find sky surf coaches which means we’re seeing fewer sky surf jumps being made each year.

Of course, sky surfing is just one of many disciplines in skydiving, all of which are incredibly awesome and great to be part of. If you’re interested in skysurfing, or any other discipline, come and join us at Skydive Carolina!